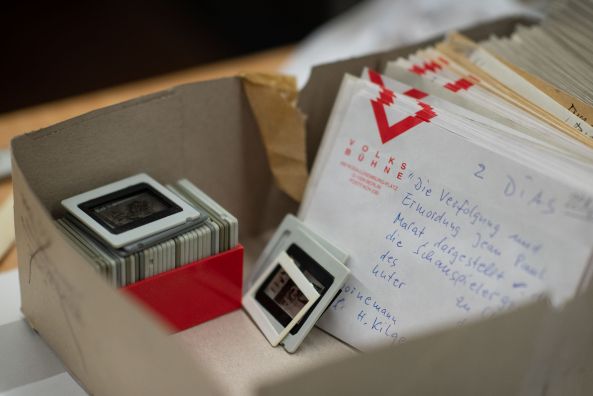 Archival material from the Archive of the Volksbühne Berlin

Emerging out of the “People’s Theatre” movement, which aimed to give broad segments of the population access to education through culture, regardless of social barriers, the Volksbühne at Berlin’s Rosa-Luxemburg-Platz first opened its doors in 1914, after construction was financed completely through donations. The history of the theatre reflects the highs and lows of Germany’s cultural history. Its international appeal stems from the prominent artistic personalities who worked there as artistic directors, stage directors, actors and actresses and set designers. Fritz Wisten, who had been the artistic director of the legendary Jüdischer Kulturbund from 1933 to 1941, served as artistic director of the Volksbühne from the early post-war years until 1961, when he successfully brought the theatre back to a level from which Wolfgang Heinz, Maxim Vallentin and Benno Besson could subsequently build on. The programme at the time merged critical contemporary plays with modern directing, leading to – in part – controversial productions by Heiner Müller and others.

In 2017, the Akademie der Künste took over the Archive of the Volksbühne Berlin, which documented the work of the Berlin theatre after the Second World War in an unusually complete scope and reflected the theatre’s unique artistic diversity. It includes, in addition to a seamless documentation of individual productions, a comprehensive photo collection, documents relating to dramaturgy and artistic direction, production and image posters as well as a collection of audio-visual recordings. Of particular importance are the documents from the artistic directorship of Frank Castorf (1992-2017), who turned the theatre into a central location for artistic and aesthetic debates, for public discourse on socio-political issues and the advancement of cultural East-West transformations.

The Archive of the Volksbühne am Rosa-Luxemburg-Platz – with a volume filling some 600 moving boxes, thus making it one of the most extensive institutional archives of the Akademie der Künste – had previously been stored in the building of the Volksbühne, where it had been scattered in cabinets, crates and boxes throughout the building’s various storeys. Some of the binders and collected material had not been touched in decades and were therefore extremely dirty. For this reason, much of the material first had to be cleaned and transferred to a new storage location before it could be archivally identified, organized and labelled. This was the case for, among other things, the stage photographs and cast notes/programme booklets from the period up to 1944, but also for numerous sensitive performance photos as well as prints, contact sheets or negative strips. The written documents from the 1950s to the 1980s (production documentation, documents from the “Artistic Operations Office” as well as dramaturgical material) were also in urgent need of preservation and conservation measures.

By carrying out in-house surface cleaning, removing acidic cardboard, brittle plastic foils and metals, and transferring to proper archival packaging, it was possible to secure the condition of a part of the Volksbühne’s core artistic collection and help ensure its preservation. Only after these urgently needed conservational measures are taken is it possible to begin the archival processing of the collection and thus to open access to this material for scientific research purposes.