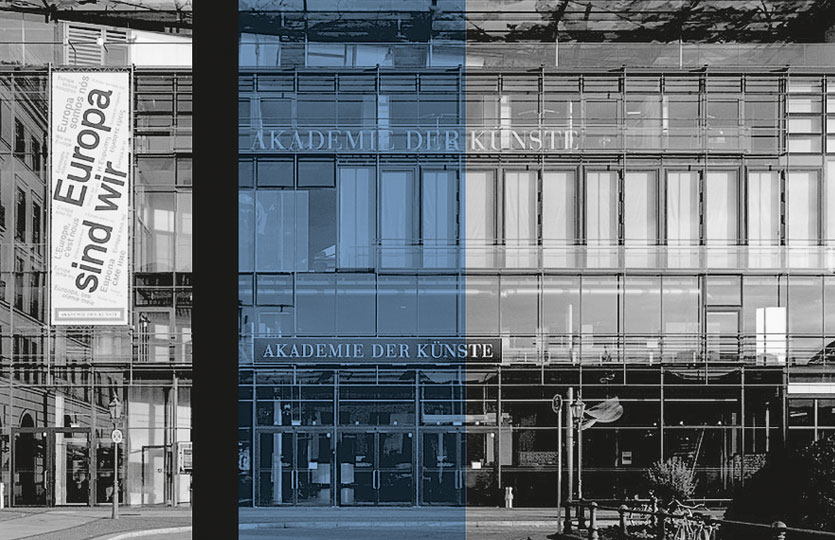 On the occasion of the German EU Council Presidency, the Akademie der Künste invites representatives of European art academies and cultural institutions to lay the foundation for a "European Alliance of Academies", which can stand up for the freedom of art and react in solidarity to political restrictions.

At the public opening on October 8, Academy President Jeanine Meerapfel will give a welcoming speech and authors Robert Menasse and A.L. Kennedy will present their vision for Europe. Political Scientist Basil Kerski will talk about how Europe's future is being discussed in Central and Eastern Europe. The evening will be accompanied by a music performance of the AoA Impro-Group with Floros Floridis and others.

During the non-public conference days, representatives of the participating institutions will discuss the form and effect of their cooperation. Minister of State for Culture and the media Prof. Monika Grütters, Prof. Bénédicte Savoy and Prof. Philipp Ther, will present their perspectives on Europe. Their lectures can be followed via livestream. On 10 October, a manifesto will be published, jointly formulated by the members of the Alliance, which will outline future possibilities for action for an open and solidary Europe.

Supported by the Federal Government Commissioner for Culture and the Media within the framework of the German EU Council Presidency.

Tickets are only available at the ticket counter on the day of the event. Please allow sufficient time.