The Academy Dialogues are dedicated to personal discussion. In each of the events in this focused format, Jeanine Meerapfel invites one renowned figure from the arts, sciences, politics or cultural policy to enter into an intensive dialogue on a specific topic. Afterwards, the audience is invited to contribute to this exchange on current issues. The discussions are held in the Club Room on the 4th floor of the Akademie der Künste at Pariser Platz.

At the start of the new series on 17 Jan 2017, Wolfgang Benz, a historian focusing on prejudice research, and Jeanine Meerapfel discussed xenophobia and preconceived negative stereotypes.
On 2 May 2017, Jeanine Meerapfel met with Monika Grütters, Federal Government Commissioner for Culture and the Media, and Stefan Kraus, director of Kolumba, to discuss the future of museums.
On 4 Sep 2017, Jeanine Meerapfel and author Hazel Rosenstrauch talked about how to deal with complexity.
On 17 Oct 2017, Jeanine Meerapfel, Klaus Lederer and Wilfried Wang discussed the architectural development of the historic centre of Berlin.
On 4 Sep 2018, Jeanine Meerapfel spoke with author Deborah Feldman and film director Peter Lilienthal about their personal relationships with the Jewish religion, with Jewish traditions and its associated customs.
On 30 Oct 2019, Jeanine Meerapfel, author Max Czollek and visual artist Anna Schapiro discussed flexible Jewish identities, hybrid realities and self-empowerment.
On 11 May 2021,  Akademie president Jeanine Meerapfel talked with cultural theorists Christina von Braun and Liliana Ruth Feierstein about what gender has to do with art, politics and religion. 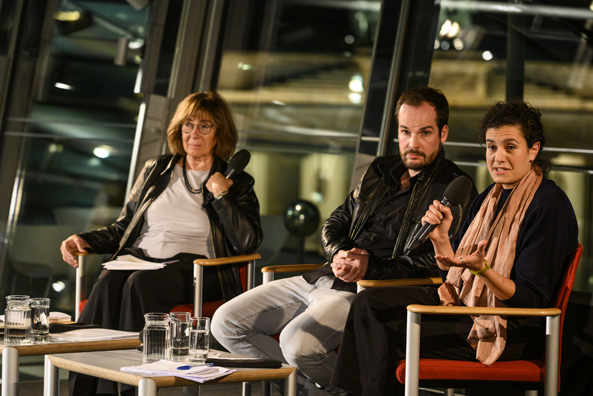 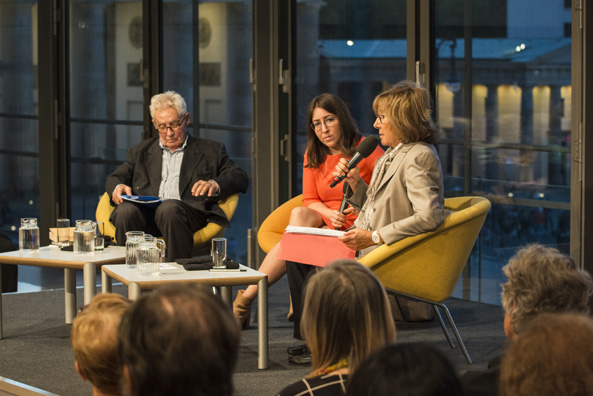 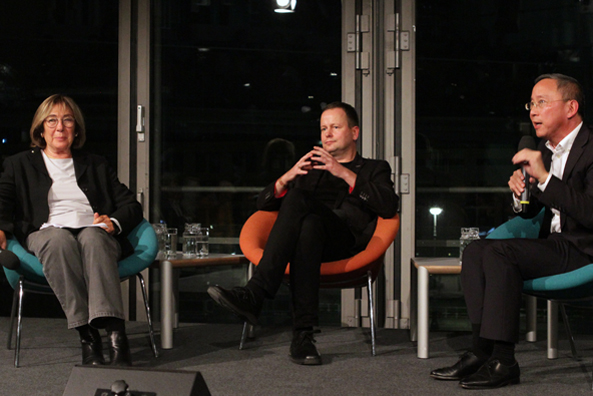 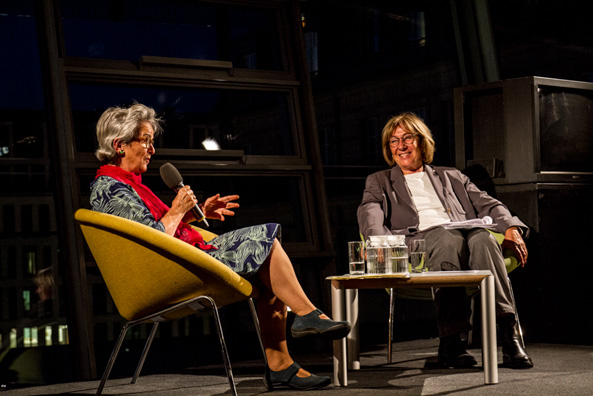 Academy Dialogue: Discussion with Hazel Rosenstrauch and Jeanine Meerapfel
How to Deal with Complexity 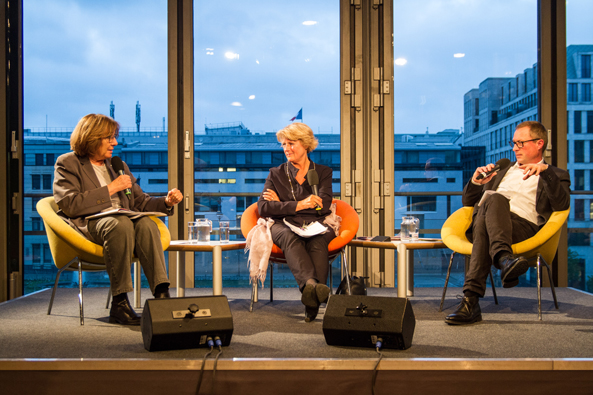 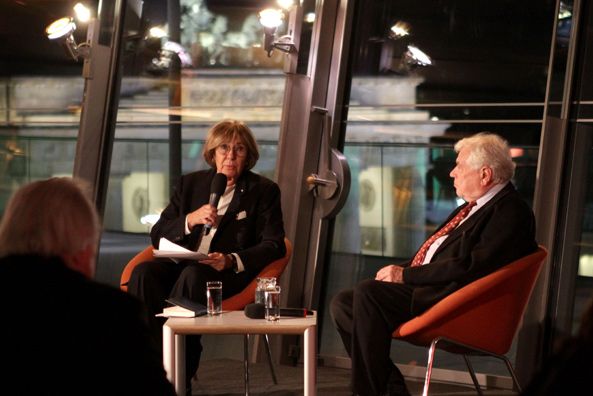 Academy Dialogue: Discussion with Wolfgang Benz and Jeanine Meerapfel
Those Who Do Not Remember Repeat Their Mistakes

The series of discussions set in motion by Jeanine Meerapfel on artistic, political and cultural-political themes – often including members of the Akademie der Künste, as well as politicians, scholars and journalists – questions artists about current events and how to tackle them.  Previous topics include the political and economic situation for artists in Greece and in Cuba since the restoration of diplomatic relations with the USA, the critical art of Argentine comics, the catchwords “integration”, “community of values” and “flood of refugees”, as well as our present-day notions of homeland and its resilience. The [and...] stands for insights into the creative output of artists invited, whose works are presented in short video clips before and after the discussions.

List of Academy Discussions [and …] since September 2015 (in German) 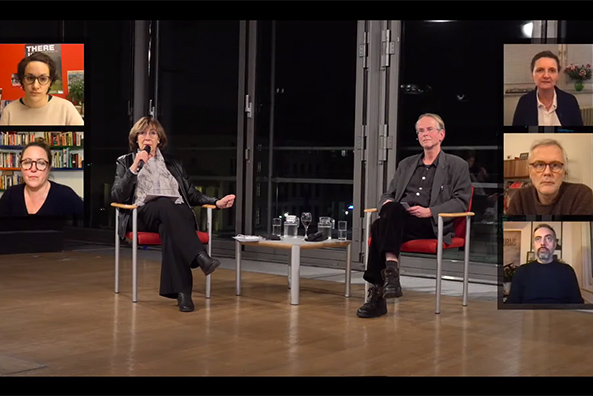 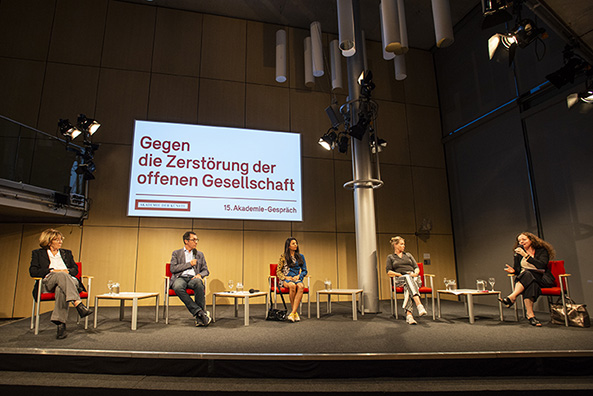 15th Academy Discussion
Against the Destruction of the Open Society 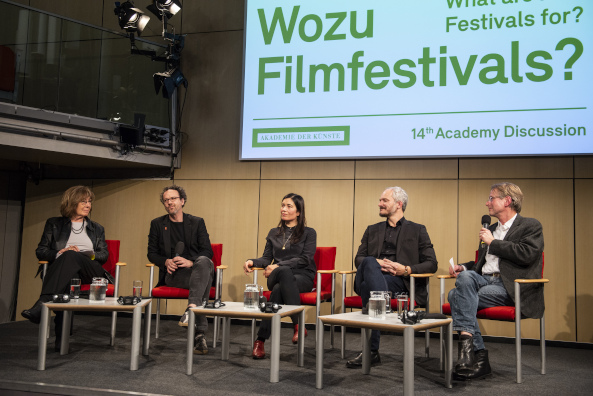 14th Academy Discussion
What are Film Festivals for? 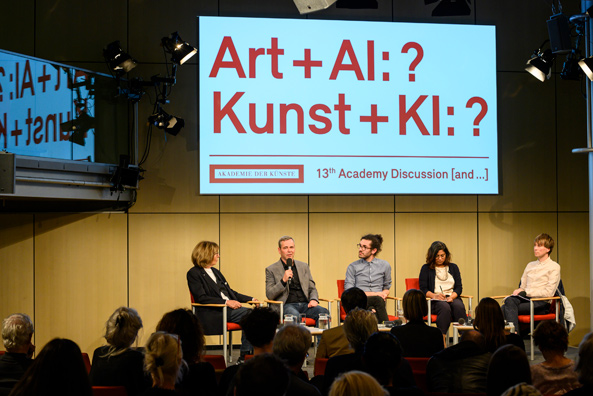 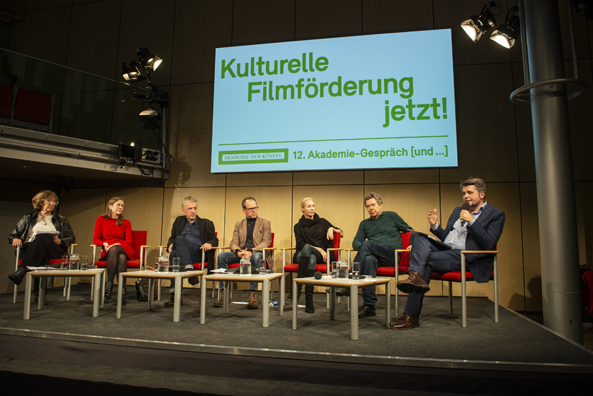 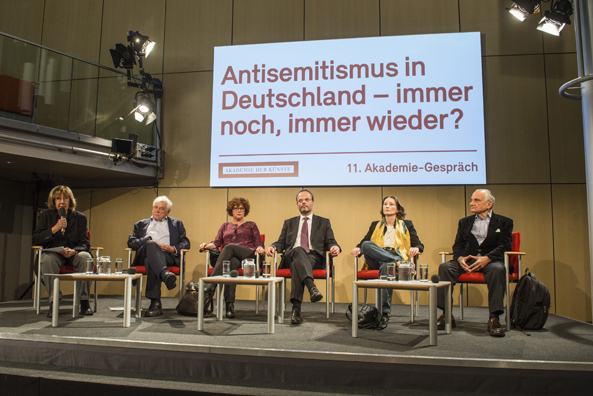 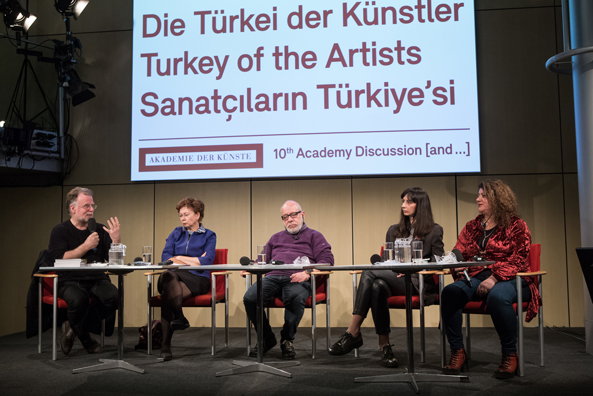 10th Academy Discussion [and ...]
Turkey of the Artists 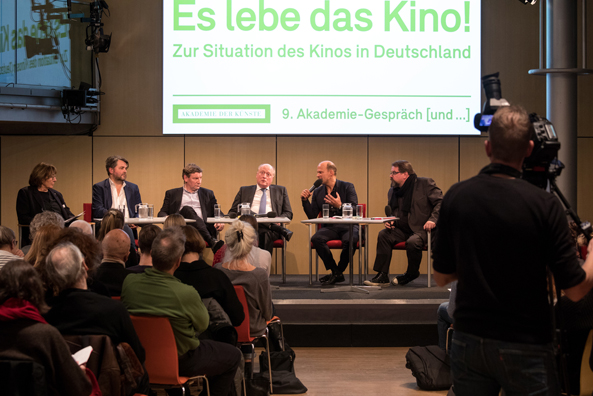 9th Academy Discussion [and ...]
Long Live the Cinema! The Situation of Cinema in Germany 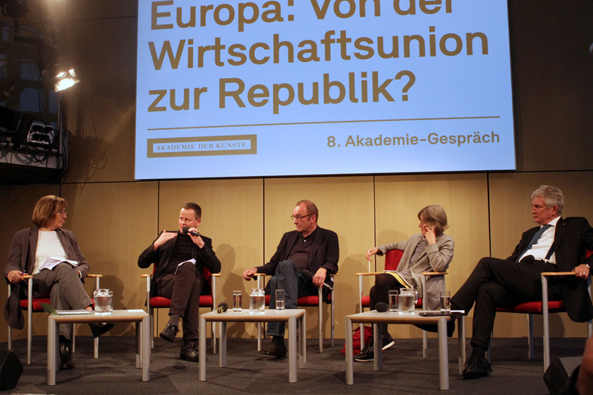 8th Academy Discussion
Europe: From the Economic Union to a Republic? 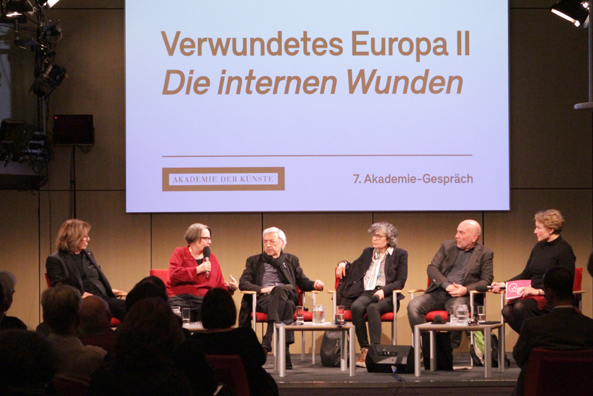 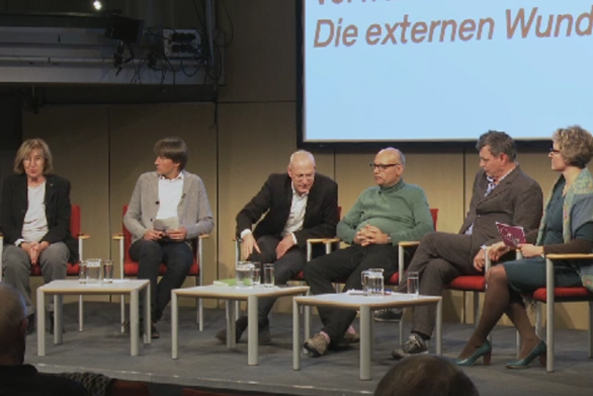 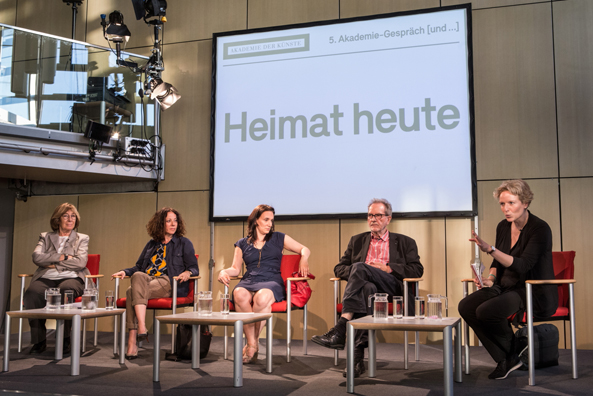 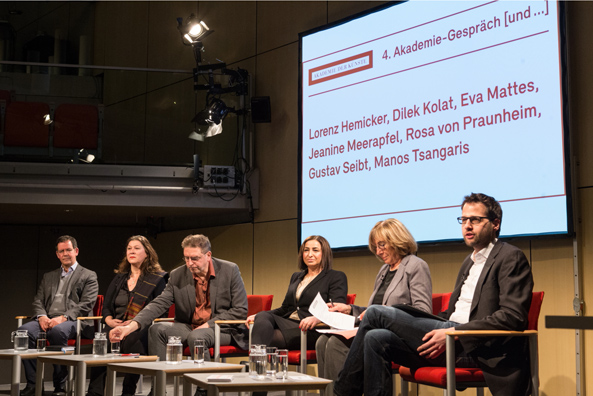 4th Academy Discussion [and …]
What do we think? Integration, a Community of Shared Values, Streams of Refugees 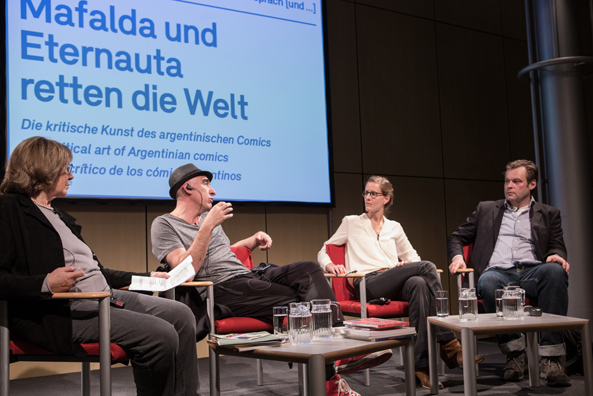 3rd Academy Discussion [and...]
Mafalda and Eternauta Save the World. The Critical Art of Argentinian Comics 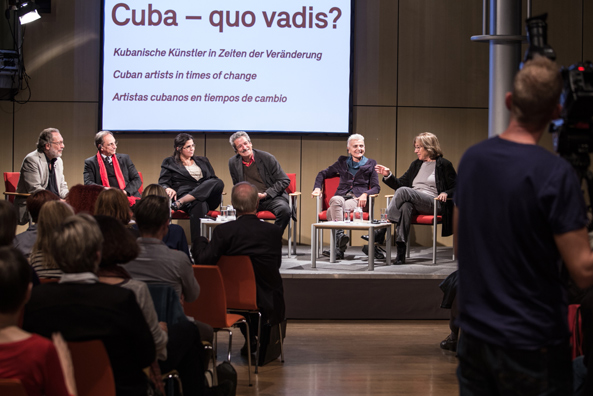 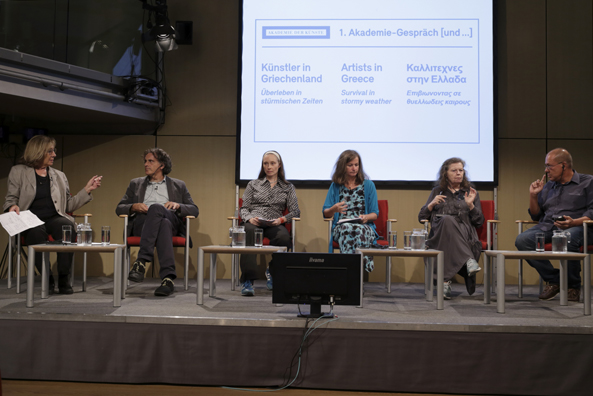 Klaus Staeck, former president of the Akademie der Künste, initiated and chaired a series of discussions from 2006 to 2015. The list including themes such as changes in copyright laws, the cultural mission of the public broadcasting stations, the role of art in the social upheavals of 1968 and 1989, the design of Berlin’s Museum Island, the murder of the Russian journalist Anna Politkovskaya , the power and influence of Google, the condemnation of the death penalty, the global threat of climate change, poverty in Germany, Europe’s refugee policy, and the situations of the threatened artists Ai Weiwei and Roberto Saviano.