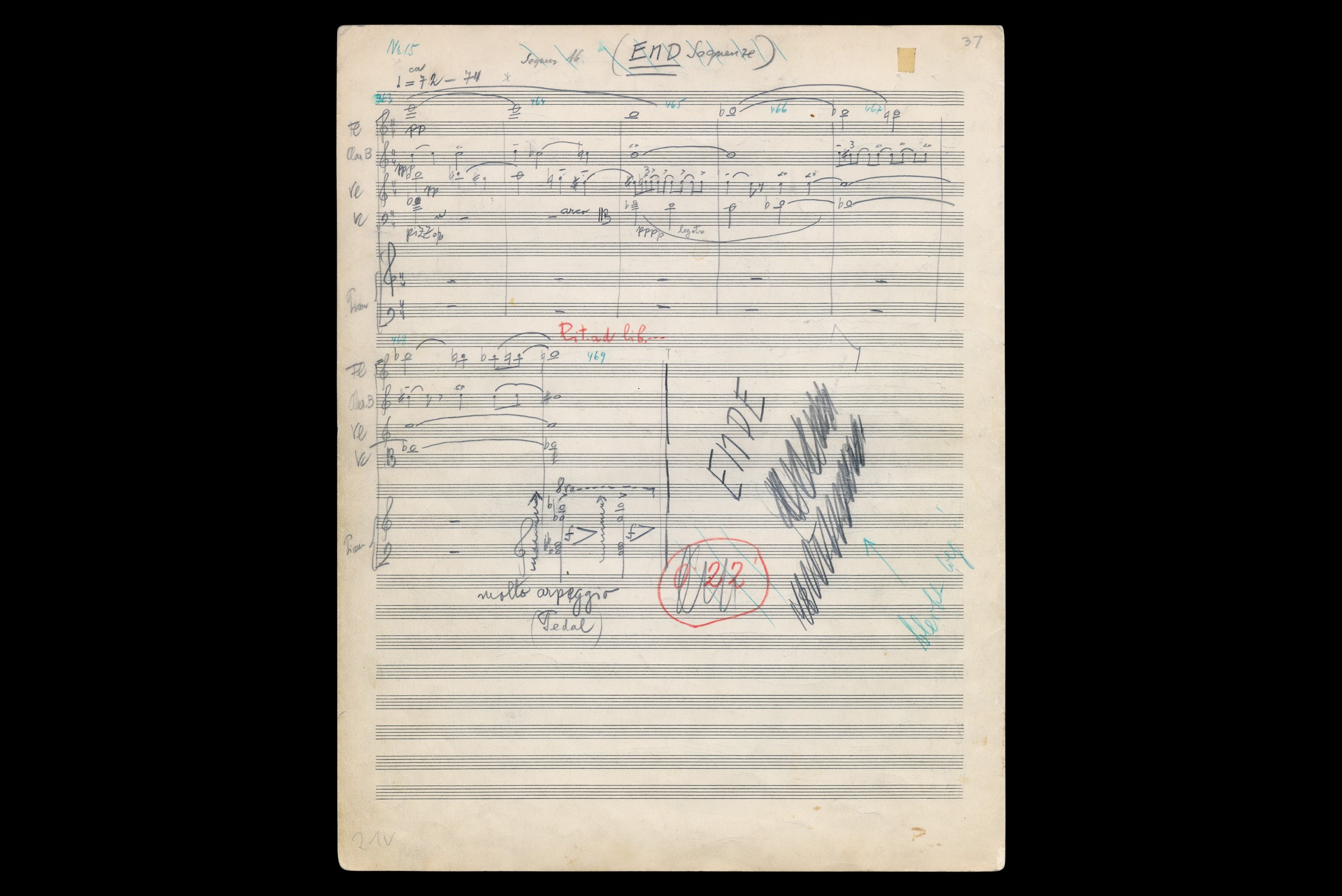 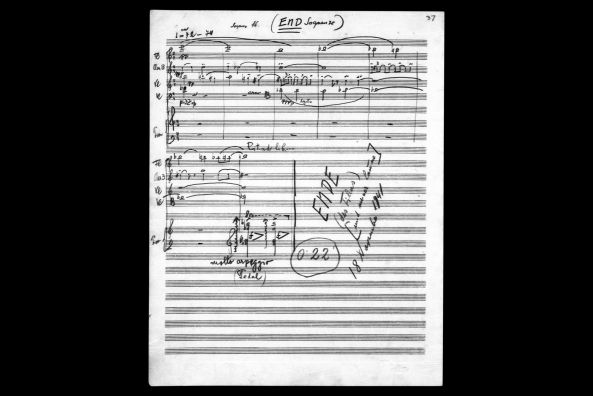 “ENDE / (des Films) / [und meiner Laune] ” (END / (of the film) / [and my mood]) The composer's final comment (including the date), which was made illegible in the original, is easy to read in this source. Hanns Eisler, Vierzehn Arten den Regen zu beschreiben (1941) the last page of the autograph, black-and-white photograph from 1948

To a certain extent, composers can determine which objects and information are to be omitted from their legacies and therefore – if included in an archive – will not be available in the music archive later on. The “safest” method is undoubtedly the physical destruction of the document in question, such as a failed score or an early work later seen as embarrassing: for example, you could search Hanns Eisler’s legacy in the Akademie der Künste Archives in vain for the opera fragment for Leonce and Lena after Georg Büchner, which Eisler (1898–1962) consigned to the flames as an unfinished torso toward the end of the 1920s. On the other hand, more than thirty romantic compositions from his youth, which Eisler had written as a 20-year-old and given to his then girlfriend as a gift, turned up again shortly after his death, even though they had already been completely eradicated from his legacy and from the catalogue of his works. The above-mentioned girlfriend had faithfully kept the scores for decades and even took them with her to the United States when forced into exile; from there, she transferred Eisler’s discarded early works – which, among other things, bear testament to the influence late-Romantic composers such as Gustav Mahler and Hugo Wolf had on the “composer of the working class”– to the newly founded Hanns Eisler Archive in East Berlin in 1965.

A second method frequently used by Eisler to withhold certain information from posterity involved the sometimes astonishing rigorous crossing out and erasure of headers, dates, and notes, as well as bars or entire lines of notes in his own autographs. In some cases, the original entries were so thoroughly scribbled over that, until recently, all attempts to decipher them had failed (see figure above). This unsatisfactory situation has now changed fundamentally for some of the scores in the Hanns Eisler Archive: after the relocation of an external storage facility in 2014, a box of small-format negatives came to light, the importance of which had previously been overlooked. As it turned out, they were photographs that he had commissioned to be taken of his most important works just prior to his return from exile in the United States in 1948 – a total of more than four hundred images of almost twice as many score pages. The best bit: many parts of the autographs that are no longer decipherable today are easily readable in these images because the subsequent deletions are absent (see figure opposite). A treasure trove for musicology – the scores are suddenly available to us again in their pre-1948 condition!

And so, in the case of the song Der Mensch, a previously unknown dedication to Brecht’s son Stefan and the date “25 Sept 1944 Hollywood” were revealed, which seems to finally refute the statement added to the first printed edition published in 1956 that the song came from Eisler’s controversial opera project Johann Faustus (1952). In the sonata for violin and piano known as Reisesonate, the places of origin of the three movements (Prague, New York, and Mexico City) are readable for the first time, which Eisler may not necessarily have wanted to see printed as a blatantly obvious reference to his “emigration to the West” that had long been frowned upon in East Germany. And the note on the last page of the score for Vierzehn Arten den Regen zu beschreiben (1941; “Fourteen ways to describe the rain”) can finally be deciphered, showing us that the last bars of the composition not only marked the end of the film the score was written for (Rain by Joris Ivens) but also the end of the positive “mood” the composer had needed for this work. With this spectacular find of photos, these and many more entries that Hanns Eisler made illegible in his scores after 1948 are, for the first time, accessible to musicological research.