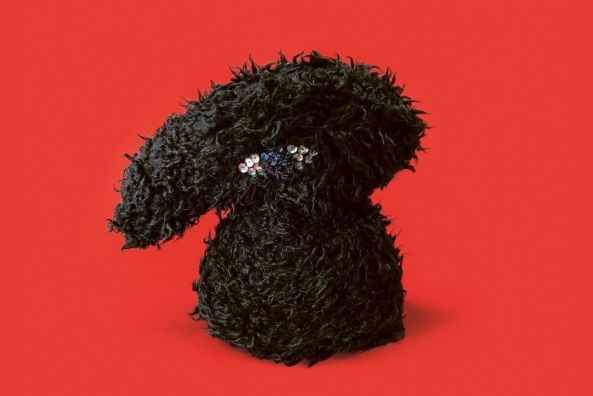 he, she, it GRIPS

It’s a thing in a box, one might think, a face with an oversized nose or perhaps an animal. That’s what it looks like, this GRIPS creature. It is the theatre’s logo, created in 1972 by Jürgen Spohn, a German graphic artist who was mainly known as an author and illustrator of children’s books. The occasion was the relocation of the theatre for children and young people from the “Reichskabarett” on Ludwigkirchstraße in Wilmersdorf to the Forum Theater on Kurfürstendamm. A change of name had also been planned, and GRIPS was the name decided upon. The term was to symbolise “having fun thinking”, and the children and young people who attended the GRIPS theatre took this literally. According to the theatre’s founder Volker Ludwig, they always really wanted to know what it meant and what he, she, or it could look like, this “GRIPS”. And so, this little black GRIPS creature came about, usually peeking out of the famous GRIPS box. There is a little clockwork key on the side, which implies recurring fun – what child doesn’t love to wind up a spring-powered frog over and over again? It is precisely this same continuity, coupled with endless fun, that has enabled the ensemble to delight its international guests, both young and old, for fifty years – with more than one hundred premieres – and this is obviously one of the secrets of its success. The theatre is not intended to enchant, but rather to make its audiences strong for tomorrow, telling realistic everyday stories without pointing the educational finger, with the aspiration not to see the world as immutable but above all to think ahead.

Since 1974, GRIPS has been based in Berlin’s Hansaviertel district and the theatre’s educational work has been second to none. The GRIPS box has even been integrated into the learning processes in school classes: this compilation of creative methods and materials referring to the living environments of the pupils is intended to encourage creative school lessons. Over the years, the GRIPS logo has appeared in a wide range of designs and variants drawn by Rainer Hachfeld, a cartoonist and playwright who is one of the in-house stage designers at GRIPS. It can be a duck or a snail, a spider or a helicopter. Anything at all. Just as the GRIPS Theater has long been a theatre for everyone – and every generation! The GRIPS audience from that very first day have grown old, many of the original actors have moved on to other places, and the third generation of spectators, who are almost grown up now too, attend the performances. The plays have not lost their topicality. The legendary Linie 1 by Volker Ludwig and Birger Heymann is still regularly sold out. With guest appearances in numerous countries, it is, according to the press, the most performed German musical in the world.

In 2019, the GRIPS Theater Archive has found a new home at Robert-Koch-Platz. Approximately 180 files pertaining to productions from the 1960s to the present have been included in the Archives of the Akademie der Künste, as well as a great many cases, photographs, programme materials, and posters. Even the things you wouldn’t always expect to find in an archive: for example GRIPS himself. The black cuddly toy was, by the way, a premiere gift for the production of Ludwig’s Julius und die Geister directed by Frank Panhans in 2002.

GRIPS is a colloquial German term that describes the ability to understand or grasp (come to grips with) ideas.