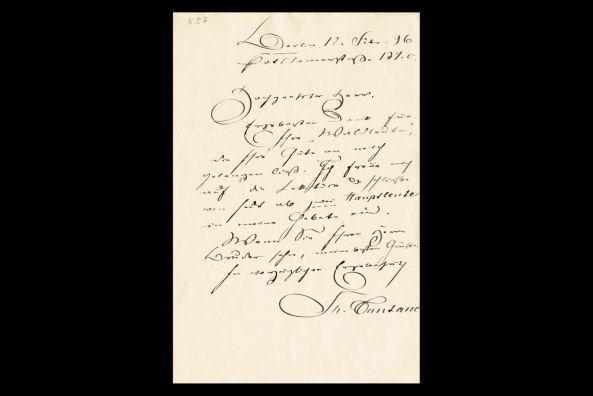 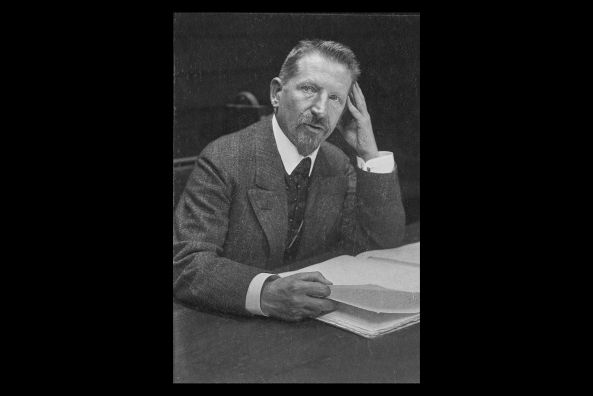 “But I detest the old
that thinks itself eternal.”

With this commitment to change, Theodor Fontane ends a letter to his friend Karl Zöllner on 18 September 1894. He is referring to an article in the Vossische Zeitung about the “Great Berlin Art Exhibition,” which ended on 16 September. The article criticises the fact that a list of the works of art that were to receive awards had not so far been published, and that Prussian art lacked the “freedom of movement” that existed in Munich, for example. It is the political dimension that interests Fontane: “[I]t is an article more on politics than on art.”

Almost twenty years earlier, in 1876, Fontane had put himself in a situation that made him acutely aware of the structures of Prussian art politics. He had successfully applied for the position of First Permanent Secretary of the Prussian Academy of Arts in Berlin. He became a civil servant, highly salaried but exposed to personal tensions within the Academy, subject to its bureaucratic regulations, and with no room for manoeuvre of his own. Fontane endured this for only a few months, to the displeasure of his wife, who would have greatly appreciated the income from this position, not to mention the associated standing in society. Fontane explained his decision to her several times, summing up his views on 15 August: “I long for the moment when I will be out of this vacuous pomposity, out of this nothingness garbed in solemnity. [...] I have no place in such idiocy.”

Fontane’s qualities as a journalist, author, and critic truly counted for little at the Academy at the time – the Literature Section was only established in 1926. After the unhappy intermezzo from March to October 1876, he returned to his literary work and resumed his duties as a theatre critic for the liberal Vossische Zeitung. There he discussed the first Berlin performance of Ibsen’s Ghosts in January 1887 with great interest. In October 1889 he responded so positively to the premiere of Gerhart Hauptmann’s play Before Dawn, which largely scandalised the audience, that the editor-in-chief of the Vossische Zeitung felt compelled to disassociate himself from the writer. Fontane, almost 70 at the time, was enthusiastic about Hauptmann, the “true robber captain of the gang of black realists”, and about the naturalistic plays in which he saw a “de-phrased Ibsen” at work. He became the – albeit not uncritical – advocate of the “Free Stage” and its young playwrights.

Gerhart Hauptmann had long been known on the Berlin cultural scene when his older brother Carl, already in his mid-thirties, also entered the public arena as a literary author. At the beginning of 1896, Carl sent his play Waldleute, premiered in Vienna the previous October, to a number of people from whom he hoped for feedback and encouragement. The writer and later psychoanalyst Lou Andreas-Salomé thanked him by postcard. Following this up, Carl Hauptmann apparently asked her directly for her opinion about his play, a drama set in Silesia and mainly written in Silesian dialect about a couple of lovers whose union is almost thwarted but is saved at the last moment. The young woman’s father is a forester who shoots a poacher, her lover’s father. When the poacher’s son fatally injures the forester in revenge, the latter, on the verge of death, insists that he has accidentally shot himself.

This conciliatory (albeit not too realistic) ending would have been unthinkable in Fontane’s poacher novel Quitt, set in Silesia and the United States and published in 1890, and it did not go down well with contemporary critics either. Andreas-Salomé replied to Carl in detail on 16 April 1896: “I don’t think [the ‘forest folk’ of Waldleute] are as ‘dull guests’ as you called them in your cover letter, but what made them alien to me at first was the fact that I couldn’t imagine them in an intimate relationship with you – or, to put it another way: [I could not] find you in it, but that could simply be because I only know a very small part of you.”

Carl Hauptmann also sent Waldleute to Theodor Fontane, being undoubtedly aware of his brother’s contacts with Fontane, and he received an immediate reply (see opposite).

Thank you very much for
your “Waldleute”,
which you were kind enough
to send to me. I am looking forward to
reading it and
from today on I will include two “Hauptleute”
in my prayers [in the double sense of the family name Hauptmann meaning literally
“captain” and Hauptleute meaning important people].
When you see your brother,
my best regards.
Your obedient servant,

Did Fontane find the tone that Andreas-Salomé had missed in the play, if he read it at all? And how might Carl Hauptmann have felt on reading Fontane’s short letter? At Christmas 1896 Carl sent him his new volume Sonnenwanderer, for which Fontane thanked him again, but that is all.

Carl Hauptmann tried to establish himself as an independent author, as distinct from his younger brother who was more successful from the outset. His efforts proved futile throughout his life. In 1896, he may still have had hopes. But Fontane’s letter of 12 February, which lumps Carl and Gerhart together as two “Hauptleute” and then asks Carl to convey regards to his rival brother, certainly did nothing to foster these hopes. On the contrary, it gave a foretaste of what was to come: on 8 January 1905, for example, a “Hauptmann Evening” organised by the Verein zur Förderung der Kunst (Association for the Advancement of Art) in Berlin gave lectures, readings, and musical settings of texts by the two Hauptmann brothers. In obituaries for Carl Hauptmann, who died in 1921, and in later articles, he is rarely mentioned without comparison to his brother. However, they had one thing in common: the urgent desire to find new themes, new forms of expression. Gerhart Hauptmann was promoted by Fontane as an exponent of modern literature and appreciated not only as an author, as testified by letters and private invitations. Carl’s attempt to also win the support of the influential critic, on the other hand, failed. This is documented by the letter shown here, one of Fontane’s few autographs in the Archives of the Akademie der Künste, if we disregard the documents issued by Fontane as part of his loathsome duties as secretary that are preserved in the Academy’s Historical Archive.


Author: Helga Neumann works as an archivist in the Literature Archives of the Akademie der Künste.

The estate of Carl Hauptmann is spread among several German and Polish archives. In the Carl Hauptmann Archive of the Akademie der Künste only the letter shown here is available, while the second, dated 25 December 1896, belongs to a further, smaller part of the estate in the German Literature Archive in Marbach.