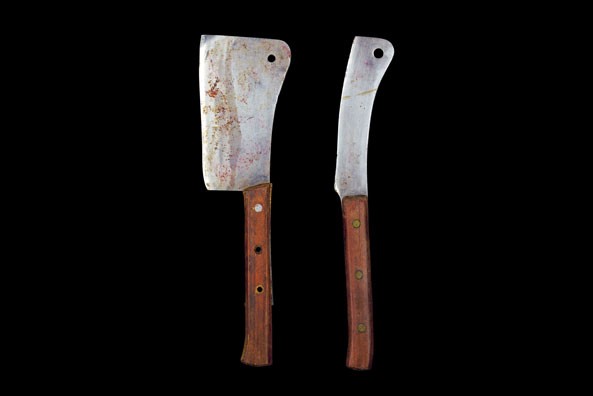 Cleavers, props from the film Das deutsche Kettensägenmassaker (1990) by Christoph Schlingensief, used by Alfred (Alfred Edel) and his family of butchers

Enfant terrible, scandalous director, endearing provocateur, political clown, likeable entertainer, and so on – these were typical labels associated with the name Christoph Schlingensief. However inadequate such buzzwords are in response to the creations of an exceptional artist, one thing is clear: hardly anyone responded to his work with indifference. He drew an exceptional amount of attention to himself. In the last years of his life, he had reached a level of fame that perhaps could only be compared to pop or film stars. From the moment he started working in theatre at Frank Castorf’s Volksbühne at the beginning of the 1990s, his work was followed closely in the press. His films were already controversial – the opinions of the critics ranged from “absolutely worth seeing” to “disgusting”. But the reaction could not be compared to the media attention commanded by his actions and performances, theatre and opera works, talk shows and installations, and the founding of a party. Schlingensief’s importance was discussed and polemicised with vehemence and tremendous emotionality. On the one hand, he was hailed and celebrated, sometimes even highly revered, on the other hand, he was dismissed as a charlatan.

Schlingensief’s work challenged/challenges the audience and certainly often demanded/demands too much of them as well, both aesthetically and thematically. At just 30 years of age, he staged the reunification of Germany as a “blood-soaked, cannibalistic act of incorporation of the East by the West”,1 as a relapse into barbarism. “At a time when everything is possible, it is irrelevant whether something is good or bad.” Schlingensief had actor Alfred Edel say this sentence in the film Das deutsche Kettensägenmassaker (“The German chainsaw massacre”, 1990). Traditional certainties no longer seemed to apply; the euphoria and sentimentality of the so-called “Wende-Zeit” (the Peaceful Revolution period) was followed by sobering reality. In a press release, Schlingensief also formulated it entirely in this sense: “After the sauce of unification, now the film to wake up!” Das deutsche Kettensägenmassaker is the second part in Schlingensief’s Germany Trilogy (part one: 100 Jahre Adolf Hitler – Die letzte Stunde im Führerbunker,1989; part three: Terror 2000 – Intensivstation Deutschland, 1992), in which the director addressed events and debates from German history.

Only a few weeks after the accession of the GDR to the Federal Republic of Germany, Das deutsche Kettensägenmassaker premiered at the Hof International Film Festival on 24 October 1990, after a production period of six months. The screenplay had been written within a few weeks, and after just ten days of filming (beginning in mid-April), the film, set in the ruined landscape of the Thyssen steelworks in Duisburg-Meiderich, was “in the box”. So Schlingensief had responded immediately to political and social events. The film he had actually intended to shoot at this point in time, and for which he had already received film funding in North Rhine-Westphalia (Colonia Dignidad), was to become a completely different production that initially still bore the title Spiel ohne Grenzen in den Grenzen von ’37 (“Game without borders in the borders of ’37”).

At the beginning of Das deutsche Kettensägenmassaker, Schlingensief shows documentary footage, original recordings of the reunification celebrations on 3  October 1990. The then Federal President Richard von Weizsäcker stated in his speech that, “We want to accomplish the unity and freedom of Germany. In our tasks, we are aware of our responsibility before God and humanity”. What then follows satirises the politicians’ speeches with their promises of blooming landscapes, while at the same time exposing the festivities as a large-scale production, for example at the end of Weizsäcker’s speech, when he whispers the next point in the event proceedings to the politicians around him: “Now it’s time for the national anthem.” The plot of the film is briefly outlined in the following: Clara (Karina Fallenstein) does away with her husband in Leipzig and drives her Trabi (Trabant, East German car) to the West in order to be with her West German lover (Artur Albrecht). As soon as the couple are united, they fall into the hands of a family of butchers (Alfred Edel, Dietrich Kuhlbrodt, Volker Spengler, Susanne Bredehöft, Brigitte Kausch, Reinald Schnell, and Udo Kier) who turn any “Ossis” (East -Germans) they can get hold of into sausages. Clara herself is spared, but is forced to watch on as the family hunt, slaughter, and eviscerate East Germans.

The film is rich, even overflowing with symbols, metaphors, and quotations. Images and slogans of the collective social consciousness (e.g. East German citizens in Trabis driving over the border; calls of “We are the people”) are to be found in the Kettensägenmassaker, along with allusions to the mass murderer Fritz Haarmann, the Hitchcock classic Psycho, and the American horror film The Texas Chainsaw Massacre, which provided more than just the inspiration for the title. A hectic hand-held camera, loads of overlapping sounds – overexcited voices, famous songs, the menacing sound of the chainsaw – everything seems to be heavily exaggerated, alienated, and ambiguous. If you try to interpret it, it becomes all the more clear just how dense, complex, and excessive Schlingensief’s (image) language is. One thing is for certain, it has not lost any of its relevance and explosiveness to this day.

In addition to work documents, work material, correspondence, and biographical and business documents, the Christoph Schlingensief Archive also contains individual objects. These include items from films, actions, theatre productions, and the director’s collections. In 2009, Christoph Schlingensief (1960–2010) gave his living legacy to the Performing Arts Archives of the Akademie der Künste.