An intuitive culture of listening 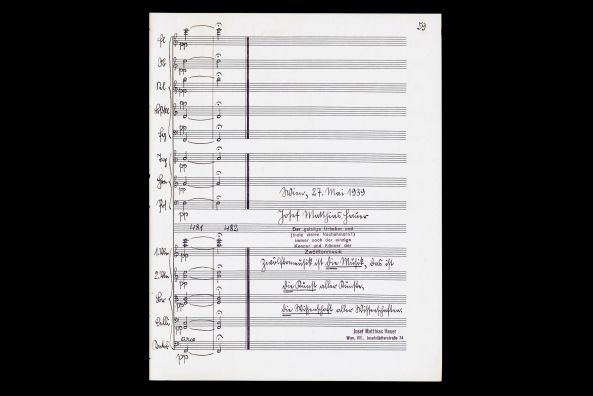 He was not just the “discoverer” of twelve-tone music, but also a precursor of minimal music: Josef Matthias Hauer, born in 1883 in Wiener Neustadt, on the southern edge of the Vienna Basin, was in contact with important artists of his time (such as the sculptor Fritz Wotruba and the philosopher Ferdinand Ebner). He was a model for literary figures (for Hermann Bahr, Otto Stoessl, Franz Werfel) more often than his competitors were, and yet remained suspicious to the musical establishment. “Despite many imitators” he was “still the only true expert in and aficionado of twelve-tone music”, as he stamped on his scores in a superior manner, thus clearly attacking the spiritus rector of the Second Viennese School, Arnold Schoenberg.

Twelve-tone music was “the music, the art of all arts, the science of all sciences,” he added in handwriting at the end of the orchestral score for Zwölftonmusik op. 82, in order to dispel any doubts as to the significance of his discovery of the eternal laws of “melos” and of the “tropes”. However, the representatives of the Schoenberg School insisted on the prevailing aesthetics of expression, deriding the eccentric outsider, who in old age looked like a Chinese wise man, with his striking horn-rimmed glasses, moustache, goatee, and sunken cheeks. And they have managed to largely exclude Hauer from the discussion on music of the 20th century to the present day. According to their concept of music, Hauer is impossible to understand. Only the fact that in 1921 Melos magazine, published by the conductor Hermann Scherchen, not only published some of Hauer’s theoretical texts but also a musical supplement to his Präludium für Celesta of the same year, which Alban Berg immediately examined on twelve-tone fields, gave them pause for thought.

Hauer wanted to serve an intuitive culture of listening and united Far Eastern, theosophical, and anthroposophic elements in his musical views. While Schoenberg strove to achieve a perfect polyphony with “twelve tones which are related only with one another” in his method of composition, by which he hoped to “assure the supremacy of German music for the next hundred years”, Hauer turned against the idealistic music culture of the West, which he associated with the notions of looking, understanding, and comparing. At the end of the score for his Zwölftonmusik für neun Soloinstrumente op. 73 from 1937, Hauer wrote in his accurate, primary school teacher handwriting: “The musically mathematical, the intuitive, must assume the highest rank in the spiritual life of people, because it lives in closest contact with truth and reality, with ‘spiritual reality’, and leads to the all-seeing summit of human knowledge, to the big world experience, while the verbally conceptual, the realm of ideas, degenerates too easily, becomes biased, and leads to gossip and lies: into polemics, dialectics, sophistry; philosophy, anthroposophy, theosophy; theology, ideology, pneumatology; phenomenalism, spiritism, occultism.”

Hauer was only to give his compositions opus numbers for a short while longer. In the last two decades of his life, he wrote more than one thousand “twelve-tone games” without individual titles: examples of a music largely freed of compositional intention, which in turn was realized by others only at a much later stage. Hauer himself claimed that he only wrote a single work in his entire life.

Several autograph scores by Hauer are to be found in the estate of the conductor Hermann Scherchen at the Music Archives of the Akademie der Künste. It is significant that Scherchen, who was always on the search for the new and unusual in art, and in his later years even promoted electronic music and jazz, also acknowledged artists who had not always been consistent with his own artistic convictions. Scherchen maintained personal contact with Hauer and not only included some of his works in the programme of his Ars Viva publishing house, but also conducted his music, as evidenced by the handwritten entries in the autograph of op. 73. It is understandable that he mainly added indications of dynamics (of volume progression), which was precisely the area in which Hauer’s music was perceived to have the most shortcomings in the ear of the listener, and was intentionally not clarified by the composer himself in order to avoid any individual expression. In general, performance indications, which were often used to excess by the Schoenberg School, did not appear to hold any relevance for Hauer’s music. The instruction “perform according to melos” at the beginning of a composition seems to have been completely sufficient for his music.

Author: Werner Grünzweig, musicologist and head of the Music Archives of the Akademie der Künste.

Image: Final chord from Josef Matthias Hauer’s "Zwölftonmusik op. 82" (from 1939), with a remark by the composer. The autograph was in the possession of the conductor Hermann Scherchen and is now kept as part of his estate at the Music Archives of the Akademie der Künste. Hauer described himself as the “discoverer” and not the “inventor” of twelve-tone music, meaning that this music did not represent an individual act of creation, but that it reflected the laws inherent in any creation, which he simply made audible. The twelve-tone games were also probably the inspiration for Hermann Hesse’s novel Das Glasperlenspiel (The Glass Bead Game),published in 1943, in which the author characterises artistic endeavour as “a mode of playing with the total contents and values of our culture”. “For like every great idea it [the glass bead game] has no real beginning; rather, conceptually, it has been there”.

The stamp Hauer placed under his signature from 1939 was supposed to document his polemical distance from Schoenberg’s method of “composition with twelve tones relating only to one another”, after he and Schoenberg had even considered a joint book on the topic in the 1920s.