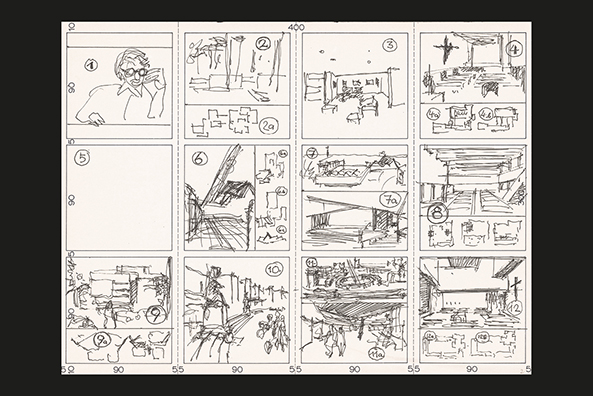 Werner Düttmann, draft for a brochure, 1977

The estate of architect Werner Düttmann (1921–83) includes an unusual drawing, the genesis of which was previously unknown. The A3 sheet contains twelve numbered fields with small sketches. Dashed lines divide the twelve images into four columns and indicate a vertical reading direction contrary to the numbering. Field 1 shows a portrait of a man, contemplatively putting his hand to his head; this is followed by floor plans, exterior views, and interiors. Only the fifth field has been left blank – a mysterious gap in the storyboard before us. But what story is being told here, for whom is it meant, and in what context did it come about?

Düttmann’s drawing style – his quick yet strong lines – is unmistakable. He draws his own likeness in field 1; we know those thick-rimmed glasses from photographs. This is followed by a selection of his buildings: Field 2 depicts the Brücke-Museum (1966) surrounded by tall pine trees, 2a is clearly recognisable as its floor plan, and 3 shows an interior view there. Field 4 depicts the interior of a church; here too, the floor plan reveals that it is St Agnes in Kreuzberg (1966). Fields 6 and 7 display the Academy building at Hanseatenweg (1960), and 8 gives an orthogonal view of the large dining area of the cafeteria at the Berlin University of Technology (1966). This is followed by Ku’damm Eck in field 9 (1972) and Kreuzberg Mehringplatz in fields 10, 11, and 11a (1977). Finally, we arrive at field 12: the parish church of St Martin in the Märkisches Viertel (1973). Apart from Mehringplatz, the floor plans are always included. Here, we instead see a bird’s-eye view to the north in the direction of Friedrichstraße and thus an overview of the urban scenery.

Clearly, a chronological arrangement of the chosen architecture, realised over a period of seventeen years, was not what had been intended. Neither does a topographical or a typological grouping make immediate sense. These buildings exclusively concern Düttmann’s Berlin buildings, as he mainly built in his hometown. So, do the buildings follow each other freely and in no particular order? Düttmann himself once praised Peter Pfankuch’s Academy catalogue on Hans Scharoun’s buildings, because he “put them in an order that does not simply follow the chronology or another system of order that is as popular as it is mindless, showing the works according to the building task. He established the connections in terms of meaning.”

In terms of meaning, the connections implied by the sequencing of the sheet in question only become clear from the context in which it was created: It was prepared by Düttmann as the layout template for a brochure, -preserved elsewhere in his estate. This small booklet, without an imprint or other publishing information and set in Helvetica, only bears its title – his name and the names of some of his colleagues – its location, and a date: “W. DÜTTMANN G. HEINRICHS P. J. KLEIHUES H. CH. MÜLLER J. J. SAWADE O. M. UNGERS BERLIN 1977.” Without any introduction, the brochure begins with Düttmann’s contribution that consists of a sequence of black-and-white photographs in the same order as his portrait and the buildings already known from the A3 drawing – but without numbering. The puzzling, blank field 5 from the template contains the architect’s short curriculum vitae. This, as well as some brief information on the buildings under the photos, is written in English; the contributions by his colleagues follow seamlessly.

In 1977, Lieselotte Ungers had edited the German–English catalogue, 1776–1976. Two Hundred Years -Berlin: Examples of the History of Building in Berlin, in the form of a comparable picture story with commentary, and the six protagonists of the brochure selected the buildings chosen for after 1900. This catalogue was a contribution to the “Berlin-Now” programme of the Goethe House, New York, in spring 1977, in which the Akademie der Künste, Berlin, was also involved and which The New York Times called “A Starburst of Culture from Berlin”. The topic of urbanism was also discussed as part of the event, and both Düttmann and his colleagues gave lectures at the Cooper Hewitt Museum under the title “Berlin – Profile of a Metropolis”. At the same time, they presented their most important Berlin-based buildings and projects in a small exhibition, on the occasion of which the brochure was published. The buildings by Düttmann and his architect friends show early signs of a canonisation of post-war modernism in Berlin – although this did not prevent many of these buildings from being disfigured or even demolished.

Düttmann did not create this layout template nor the drawings from memory, but rather had fun tracing existing illustrations, photographs, and floor plans. He traced his preferred photos of his favourite buildings – and those of himself – producing with his selections an unusual medial sequence, which thus circles back to the designer making the drawings.

The layout of Düttmann’s buildings on the sheet follows the logic of the brochure – which was produced in Japanese binding – in A4/2 format. Each architect had two A4 sheets, which were printed on one side and folded. This meant that the fields in the first vertical row are read from top to bottom, those in the middle two vertical rows form the double page in the booklet and are read downward in pairs over the fold, with the last row being read downward again. It only now becomes evident that the order was typologically motivated: In the last row, Düttmann groups his “hall buildings” together; he obviously considered the church interior and the cafeteria to be related building tasks, intended for people with a common interest coming together in one space. Düttmann may have chosen Ku’damm Eck on the first page because it was his “most American” building – a shopping mall with a state-of-the-art media wall. And the contemplative gesture also becomes clear when compared to the photographic template: The hand on his head is actually holding a cigarette.

Author: Sibylle Hoiman, Head of the Architecture Archives of the Akademie der Künste.