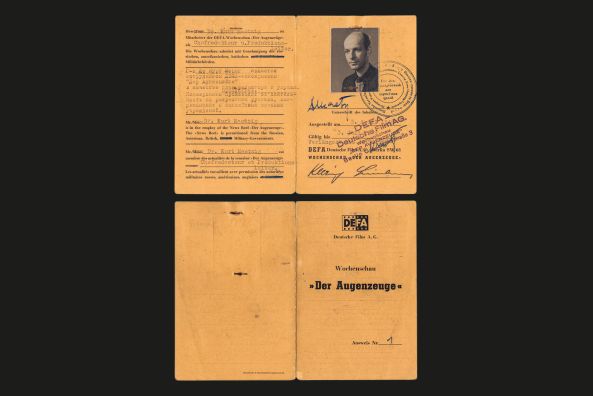 The slightly yellowing document – worn from much use and now very brittle – confirmed Kurt Maetzig was pursuing important cultural endeavours as editor-in-chief and production manager of the newsreel Der Augenzeuge (The eyewitness). This document allowed him to claim food stamps and to move freely in all four of Berlin’s occupation zones. But strictly speaking, when the pass was issued on 3 April 1946, the issuer, the Deutsche Film AG, did not as yet, exist. It was only officially founded a good six weeks later.

The Soviet occupying powers had already given the order to establish a new German film industry shortly after the war. One of the first to apply for this task to the German Central Administration for National Education was the then 34-year-old Kurt Maetzig, who had previously come into contact with the medium of film only through work in his father’s film-copying business. He and set designers Carl Haacker and Willy Schiller, actors Adolf Fischer and Hans Klering, and businessman and lighting technician Alfred Lindemann set up a working group in November 1945 to prepare for the resumption of film production. This “Filmaktiv” identified the available production facilities and film equipment, forged contacts with other film professionals, and set about building up the new company. Soon, a name was found: Deutsche Film Aktiengesellschaft, or DEFA for short. Hans Klering designed the logo – two stylised pieces of film reel side by side, one white and one black, each bearing two letters of DEFA in black and white respectively.

First, the Soviet occupying powers ordered the creation of a newsreel with a new artistic and journalistic profile. Maetzig took on this job and had already started filming in mid-January 1946. On 19 February 1946, the first German newsreel in post-war Germany had its premiere – the new film company’s very first production.

Maetzig worked as a director, author, and occasionally as a narrator together with his then-wife Marion Keller on the newsreel, which shortly afterwards was renamed Der Augenzeuge. For the show, they coined the slogan: “You see for yourself – you hear for yourself – judge for yourself!” Maetzig later recalled, “I felt completely free, and I was completely free in that initial phase. There was a censor there, but he hardly ever exercised his censorship powers. And that gave us a feeling of great freedom and sovereignty.”

Work on DEFA’s first feature film also got under way before the production company was actually founded. In the ruins of Berlin, Wolfgang Staudte began shooting Germany’s first post-war film, Die Mörder sind unter uns (The Murderers are Among Us), on 4 May 1946.

Finally, on 17 May 1946, the new company was officially founded on the premises of the Althoff-Ateliers in Alt Nowawes, Babelsberg. As the Soviet cultural officer Sergei Tulpanov put it, it was to “help restore democracy in Germany, free German minds from fascism and educate them to become socialist citizens”. Tulpanov presented the licence for the “production of films of all categories” to five licensees, among them Maetzig, who was appointed DEFA’s first artistic director.

A novella by Hans Schweikart arrived on Maetzig’s desk only a little later, based on the fate of the actor Joachim Gottschalk and his Jewish wife. The Gottschalks had -committed suicide together when Mrs Gottschalk was to be deported to Theresienstadt in 1941. The material appealed to Maetzig, who saw parallels with the fate of his own Jewish mother. His parents had officially divorced in 1935 because of the Nuremberg Laws, but they continued to meet secretly. When his mother was threatened with deportation in 1944, she also took her own life.

Maetzig subsequently decided to film the story himself. In the winter of 1946/47, he wrote the screenplay for Ehe im Schatten (Marriage in the Shadows), and on 3 October 1947 the film was premiered concurrently in all four sectors of Berlin. It met with a huge public response. Within a short time, it was seen by over ten million film-goers – making it the most successful German film of the period. In 1948, it was one of the first winners of the New Audience Award from the magazine Film Revue, which was sponsored by the publisher Franz Burda; this award was soon to become famous as the “Bambi”.

DEFA existed for over forty years, producing more than 700 feature films, 2,250 documentaries, and 750 animated films. With East Germany officially dissolved, the film studio was sold in 1992, and the new owner removed the abbreviation “DEFA” from the company name, renaming it Studio Babelsberg. Since 1998, the DEFA Foundation has been responsible for the production company’s cinematic heritage, as has the Akademie der Künste with the preservation of the archives of numerous artists who worked for DEFA.


Author: Torsten Musial, Head of the Film and Media Arts Archives of the Akademie der Künste.