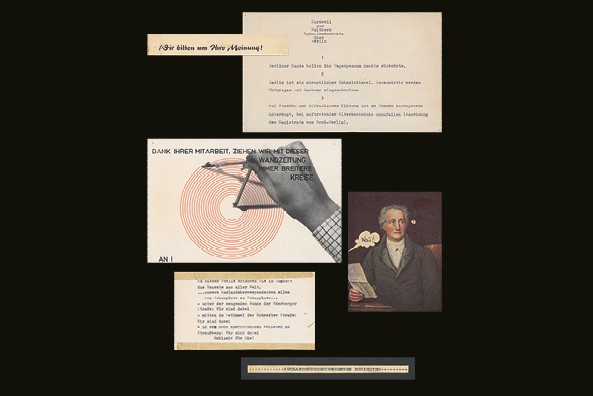 He had planned a voyage. From the beginning of July to the end of September 1970, Joachim Walther intended to sail the Mediterranean in a cargo ship of the Deutsche Seereederei (DSR) shipping line, stopping at the ports of Algiers, Tripoli, and Alexandria. But permission was denied.

Instead of reporting from southern climes, therefore, he reported from and for his home neighbourhood, choos-ing to do so by means of a wall newspaper posted in his apartment block at Schönhauser Allee 71. He posted bulletins there every week from July to August: jokes, sayings, montages, recipes, erudite quotations, aphorisms, fictitious agency reports: “BERLIN. (Ackerpress). News of Milli: the other day, Milli (54) accused a resident of a front flat at Ackerstrasse 5, to her face, of being ‘an old cow!’” along with photos, poems, drawings, letters to the editor, and the current theatre and cinema programmes. Foreign correspondent Walther reported not on Africa, but instead on the familiar foreign territories of Oderberger Straße, Schwedter Straße, and Ackerstraße in Berlin, the capital of the GDR. His wall newspaper was a continuation of the journalistic and literary form of miscellaneous news items and at the same time a parody of and subversive response to the standardised wall newspapers that hung in every company premises and many a block of flats.

The carefully dated materials for this local newspaper can be found in Joachim Walther’s estate, which has been in the Literature Archives of the Akademie der Künste since 2021. And with them the writings of an author who also became a literary historian after reunification. Born in Chemnitz in 1943, Walther was an editor at the book publisher Der Morgen from 1968 to 1983. His first novel, Sechs Tage Sylvester (Six days of Sylvester), was published in 1970. As the editor of the magazine Temperamente, he was dismissed along with the entire editorial staff in 1978. After the fall of the Wall, Walther became deputy chairman of the German writers’ association and published the encyclopaedic standard work Sicherungsbereich Literatur (Security zone literature) about writers and the Stasi – that had been observing and “operatively processing” him since 1969. In 2001, he and Ines Geipel founded the “Archiv unterdrückter Literatur in der DDR” (Archive of suppressed literature in the GDR) and published the series Die verschwiegene Bibliothek (The silenced library), in which texts not published for political reasons were made accessible for the first time.

His wall newspaper, on the other hand, was public. He then went on holiday, in October, not to the Mediterranean but to Hiddensee on the Baltic Sea coast. He wrote his first article about it, “Journal einer Nachsaison” (Journal of a postseason), for the Weltbühne. In it appears a sentence that the residents of his apartment block would have found familiar, because they had already encountered something to the same effect on the walls: “Dogs are permitted to bark. During the day, they reverse-bark their nightly quota.” In a literary reportage about Schönhauser Allee, published in May 1971, the sentence turns up again – as do two other sentences from his treasury of aphorisms: “Berlin is a linguistic melting pot, and Thuringians and Saxons are currently being melted down.” And: “It is strictly forbidden for ageing trees on Berlin’s streets and public squares to fall down.” But that is not the end of his quotation journey. Walther integrated the reportage, and with it the aphorisms, in his second novel Zwischen zwei Nächten (Between two nights), published in 1972.

On the way from the wall newspaper to the magazine to the book, the aphorisms not only change their literary function. On the journey of self-quotation something is also lost. The anarchic freedom of an unregulated public sphere – however small it may be, like that of Schönhauser Allee 71 – is blunted and truncated by the intervention of editors and the obligatory “print approval procedure”. In this way, the wall newspaper illustrates negatively Walther’s lifelong preoccupation: that of the suppression of literature by the authorities.