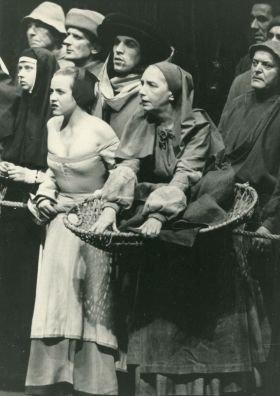 In 2013, with financial support from the Berlin Senate Chancellery – Cultural Affairs, a complex process of restoration was successfully completed for 104 of Bertolt Brecht’s Modellbücher (‘model books’), some heavily worn, as well as 724 photographs by Hainer Hill.

To protect these holdings of outstanding originals, much in demand, the Project 2014/2015 set out to digitise them. In this way, there is now decentralised access to the material online in the Archives Database, as well as through the Deutsche Digitale Bibliothek (DDB) and Archivportal-D.

The Modellbücher, the surviving record of the spirit of a performance (Geist einer Aufführung) (Peter Voigt), document in book form Brecht’s basic approach in his theatrical productions (including Mutter Courage und ihre Kinder, Leben des Galilei, Der kaukasische Kreidekreis). Dating from the 1940s to the 1960s, the books usually comprise several hundred photos, words of the play, and Brecht’s handwritten notes. The photographs by Hainer Hill are also numbered among the outstanding documents in the Bertolt Brecht Archive. Hainer Hill (1913–2001) was a stage designer and photographer. In 1952 to 1954, possibly Brecht’s most productive years after the Second World War, Hill was working at the Berliner Ensemble photographing the most important performances and rehearsals.

In the course of Project 2014/2015, the Modellbücher and photographs were digitised, creating 89,000 digital images and 104 PFD/A files. Instead of working with the sensitive originals, researchers can now view the digitised copies in the Akademie der Künste reading room. In future, most of both holdings will be available online in the Deutsche Digitale Bibliothek (DDB) as well in Archivportal-D. Through a cooperation with the Zuse Institute Berlin (ZIB), the long-term digital archiving of the data created in this project is secured, as well as its long-term availability.