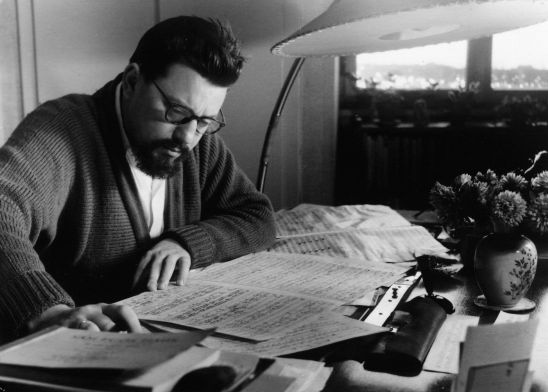 The edition of Bernd Alois Zimmermann’s complete works is a project realised by the Berlin-Brandenburg Academy of Sciences and Humanities and the Academy of Sciences and Literature Mainz working in close cooperation with the Music Archives of the Akademie der Künste, Berlin. Bernd Alois Zimmermann is regarded as one of the most remarkable twentieth-century German composers. Not only were his works quick to attract scholarly interest, even in his early years, but have become a fixed part of repertoires around the world, even outside circles specialised in New Music. The impact of Zimmermann’s oeuvre is informed by an overall artistic approach transcending the borders of traditional genres and disciplines together with a focus on the major compositional and aesthetic challenges in the twentieth century, including those rooted in the socio-historical context. From the 1950s, Zimmermann’s compositional method, exceptionally progressive in its use of technology yet equally reflecting theoretical issues, enabled him to integrate diverse musical styles, genres and quotes from very different spheres and open up to new media. As a result, this project offers a unique opportunity now to develop innovative philological methods in the area of music.

The edition of complete works will draw significantly on the Bernd Alois Zimmermann Catalogue Raisonné  by Heribert Henrich. Issued by the Akademie der Künste and awarded the Deutsche Musikeditionspreis prize in 2015, this already includes a very detailed list and appraisal of sources of Zimmermann’s oeuvre.

Bernd Alois Zimmermann’s works, writings and letters are to be published together with Schott Music in a hybrid edition with a digital online version designed to meet the demands of more exact and source-directed scholarly interests. The printed edition contains, first and foremost, all the information needed for performing the works.