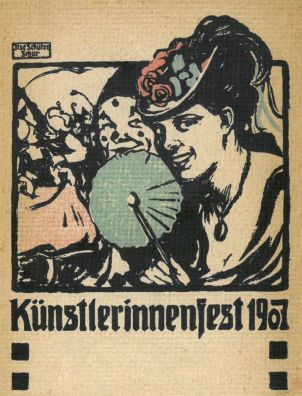 In 1988, on the occasion of the 125th anniversary of the non-profit association Verein der Berliner Künstlerinnen (VdBK) work began on reconstructing the archive lost when the association’s rooms were destroyed in early 1944. These efforts led to the Collection now in the care of the Akademie der Künste. On the basis of the archive contract between the Akademie der Künste and the VdBK concluded on 26 October 2012, the collection was transferred to the Akademie in June 2013. The archival material on the association document the history of the first professional German organisation for women artists and women art patrons, founded on 13 January 1867. The core of the documentary material comprises records with biographical data on a total of 3,517 historical and contemporary women artists, largely from German regions, and others from their circles. In addition, the collection includes speeches, correspondence, lists of exhibits, newspaper clippings, descriptions of works and projects, auction results, leaflets and printed matter.

The archival indexing process sets out to provide the materials in the form of finding aids for the interested public and prepare the data for online presentation on the webpages of both the Akademie der Künste and the VdBK.

A proportion of this work is to be shown as part of the exhibition Fortsetzung folgt! from November 2016 to March 2017 in the Alexander and Renata Camaro Foundation in Berlin. The exhibition is accompanied by a publication which, among other things, also offers an insight into the results of the first appraisal of the holdings by the Academy Archives. The publication not only documents the history of reconstructing the VdBK archive, but also traces the association’s development as reflected in its 25 chair persons from Auguste von Mühler (1867) to Ute Gräfin von Hardenberg (2016).

In a process launched to coincide with the exhibition opening, the Academy Archives will begin presenting the indexed data of the VdBK’s holdings in its online database. This will include all the facts so far gathered on around 1,200 women artists and 700 women patrons and art lovers from the dictionary of women artists Käthe, Paula und der ganze Rest (Berlin, 1992).

In cooperation with and funded by the Verein der Berliner Künstlerinnen 1867 e. V.