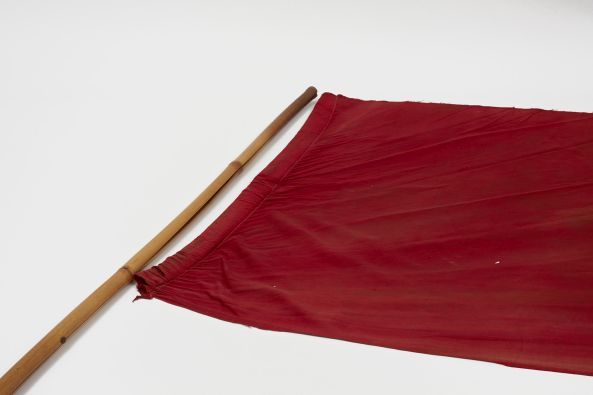 Writing in her journal in Berlin in November 1954, Danish actor, director and writer Ruth Berlau noted: “I’m hanging my red flag out – this beautiful long red flag on the bamboo pole – it’s raining – he [Brecht] is putting on a celebration of the revolution in his theatre – but I’m not going – I can’t – [...]”.

In 1935, almost 20 years earlier, this flag was used in a production of Brecht’s Die Mutter (The Mother) in the Revolutionært Teater in Copenhagen. Ruth Berlau, who translated the play into Danish together with Otto Gelsted and also directed it, kept the flag until her death in 1974. She took this same red flag along in May 1941 when she left Scandinavia with the Brecht family, travelling across Russia to Vladivostok, boarding a ship there in June for the USA, just nine days before German troops invaded the Soviet Union. What does the red flag stand for? Is it a memento? A symbol of a better political world order? Or does it represent a fulfilling yet tragic love and work relationship?

Ruth Berlau met the exile Brecht – the love of her life – in 1933, when she was 27 years old. In his writing she appears as “Lai-tu”, whose love was sufficient “to make an entire people happy”. Decades later she would still emphasise: “Our thing was not just love – it was primarily work – as Brecht called it: THE THIRD THING. [...] I was a writer and director and, most importantly, a communist before I met Brecht.” When Brecht fled Denmark for Finland, he told his helper and lover: “from now on I’ll wait for you, wherever I go, and expect you. And I’ll expect you not because of your coming, but because of myself, Ruth.” She followed him into exile and returned seven years later, the red flag also in her luggage, still ready to accept Brecht’s “instructions” requesting her “to take care of herself and stay safe until our thing begins, the real one, that you need to save yourself for”. In a postscript to a letter to Brecht in 1955, Berlau recalls the mutual political homeland, associated with the refuge of their love. It is not a real place, but a piece of material: “And the flag is red.”

Ruth Berlau (1906, Copenhagen; 1974, East Berlin) was an actor, director, photographer, and author. She co-founded the Revolutionært Teater in 1932 and first encountered Bertolt Brecht one year later on Thurø, Denmark. In 1941 she went into exile in the USA via Leningrad, Moscow and Vladivostok, first living in Los Angeles and then as of 1942 in New York. After returning to Europe in 1948, she travelled from Le Havre to Brecht in Zurich, and lived as of 1949 in East Berlin, with intermittent stays in Denmark. Photograph: California, probably 1945. Photographer unknown.