Tin box belonging to Paul Westheim, from an internment camp 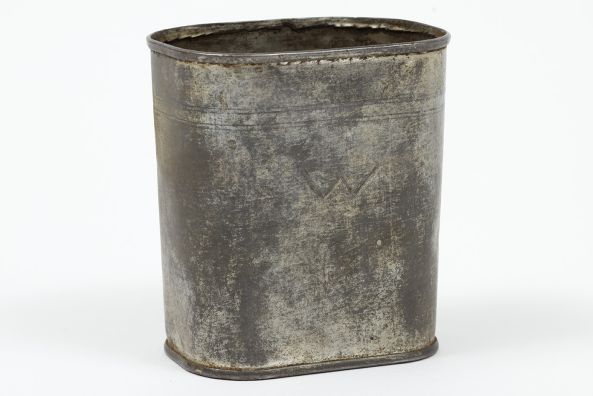 Tin box belonging to Paul Westheim, from an internment camp, 1939–40

Why bring such a small, nondescript tin along into Mexican exile, and keep it for a lifetime? The “W” scratched in its surface indicates the owner – Paul Westheim. When he arrived in Mexico following his odyssey through numerous French internment camps, he had little in the form of mementos from the time in Europe: a few documents and the tin, which had served as both plate and cup. It vividly recalled his past. After the war began, all German immigrants in France were declared enemy aliens and placed in internment camps. Paul Westheim, then fifty-three, was also detained, at the latest by the end of September 1939, and he had to live in various camps with only a short interruption until December 1940. As with other artists and intellectuals, it made little difference that he was a political refugee and had been expatriated by Germany in 1935. The living conditions for the immigrants in the internment camps were catastrophic. Water and sanitary facilities were insufficient, disease epidemic, and food in very short supply. In addition, after the June 1940 German-French ceasefire agreement, there was a constant fear of being extradited. Westheim was initially at the Francillon camp. By the time he was released in January 1940 on the initiative of the PEN administrative board, he had almost lost his sight because of a lack of adequate medical care. He was reinterned in May 1940.

It was probably in spring 1942, just a few weeks after his rescue and arrival in Mexico, that Westheim recorded his memories of the camps: “I was in France in 10 camps – in Francillon, in Les Milles, and in the infamous Gurs camp, just to name the worst. I was spared only one: Vernet, where the political suspects were interned.” A shortage of paper led Westheim to write in narrowly spaced lines on both sides of the thin pages. His eye disease also limited the legibility of his handwriting, resulting in the text being decipherable only in certain sections: “The most terrible nutrition was in Gurs, where for 10 men there was one loaf of bread a day – 3 or 4 thin slices. And that was the main source of sustenance! At midday there was a soup bowl of hot water with 3 or 4 carrot slices floating in it. Evenings the same fare. There was also meat 2 or 3 times a week, two small pieces the size of bouillon cubes per man.”

Paul Westheim (1886, Eschwege; 1963, West Berlin) was a writer on art, art critic, and publisher of the periodical "Das Kunstblatt". He fled to Paris in 1933 and was stripped of his German citizenship in 1935. Following detention in French internment camps in 1939–40, he spent time in Marseilles and Cassis-sur-Mer in 1941 before obtaining a visa for Mexico through the Emergency Rescue Committee (Varian Fry). In November 1941, he travelled via Marseilles and Lisbon to Veracruz. A resident of Mexico City, Westheim died during his first return visit to Germany.