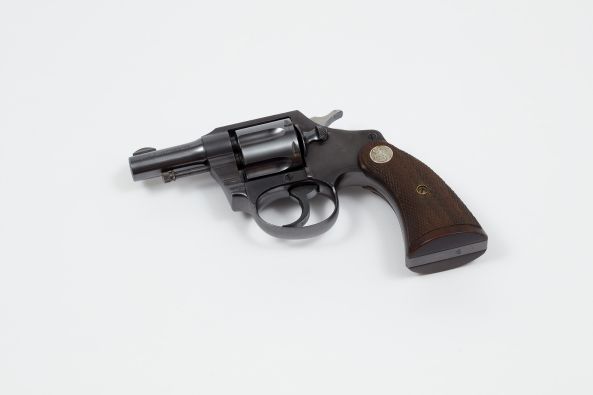 Revolver owned by Kurt Tucholsky, after 1926

The final step is reached – remaining silent. There was no way back to writing. The next step leads into the unknown, into the abyss. A revolver has been ready for some time now. But in the end, it was a silent exit: an overdose of sleeping tablets.

Always a radical thinker, the final conclusion of Kurt Tucholsky’s thoughts and actions was suicide. It was a radical exit for this talented journalist and satirist; a pacifist, antimilitarist, Jew, and prescient admonisher who warned of the looming danger of the Nazis. For years he wrote about the social ills of the Weimar Republic, chronicled every political assassination of that time. His pen was his sword. On 25 July 1935 he wrote to his friend, the physician Hedwig Müller, who lived in Switzerland: “Every day I sense it more: if I had the money, and if I didn’t have to – I would never write another word again. For whom? I no longer feel the desire to speak.” For someone for whom writing was a calling, this statement is equivalent to losing one’s entire raison d’être. Following the National Socialists’ assumption of power, signs of isolation, depression, torpor became increasingly apparent. In addition, his serious economic and health issues were accompanied by unfulfilled romantic affairs.

Was suicide the last, true act of freedom for Tucholsky, who once declared “the democracy of death” as the “truest of all democracies”? In any event it must have been a great comfort to him to have obtained this gun. When and how the gun came into his possession is unclear. It is a Colt revolver, the barrel clearly engraved with the name of the famous company in Hartford, Connecticut as well as a succession of patents since July 1884. According to the last entry, police weapon 361914 must have been manufactured after 5 October 1926. Official permission was needed before the archives at the Akademie der Künste could add the revolver in February 1984 to the Tucholsky collection. Records state that “the firearm has been deactivated but, as instructed by the Allied Kommandatura, it should be kept in a safe.”

It is hard to imagine Kurt Tucholsky with a holster on his hip. And just as unlikely for Peter Panter, Theobald Tiger, Ignaz Wrobel and Kaspar Hauser. Although Tucholsky knew “the wrath of the Nazis is beyond all measure at not having been able to get me”, this knowledge in itself afforded him – even if only briefly – a moment of satisfaction. Probably out of consideration for Gertrud Meyer, his faithful companion in his last years, he opted for a less violent method. “He departed quietly from this life, […] gently, so as not to disturb those around him.” (Kurt Tucholsky, Sudelbuch)

Kurt Tucholsky (1890, Berlin; 1935, Hindås/Sweden) was a writer. From 1924 to 1929 he was a correspondent for the weekly magazine "Weltbühne" and daily "Vossische Zeitung" in Paris, and subsequently worked almost continuously as a freelance writer, mostly in France and Sweden. He moved to Sweden in 1929, and was stripped of his German citizenship in 1933. Two years later, he committed suicide (aged 45).