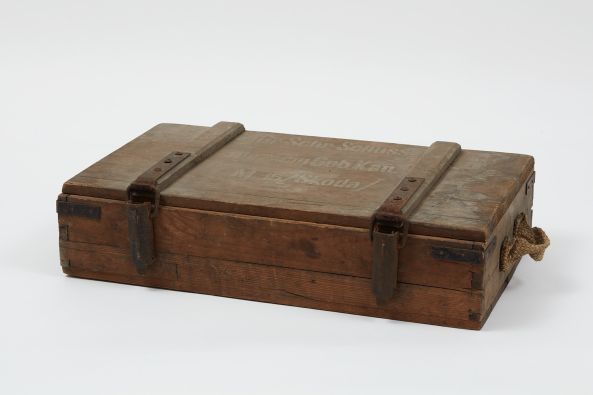 The experience of pianist Ella Jonas-Stockhausen shows that not every escape involves an escape route. Her Jewish background made her the target of the typical mechanisms of increasing harassment and exclusion instituted after the National Socialists took power. In 1935, although she had previously performed as a soloist with the Berlin Philharmonic Orchestra, the Reichsmusikkammer (Reich Music Chamber) banned her from performing under the Nuremberg Race Laws. Her non-Jewish husband, the chemist Ferdinand Stockhausen (1875–1950), from a Krefeld industrialist family, was also the victim of Nazi repression, denied a professorship in 1934 due to his wife's “non-Aryan background”. Ella Jonas-Stockhausen's achievement of eluding the National Socialist persecution is remarkable. Her complete withdrawal into the seclusion of her private space spared her the worst. In her flat at Duisburger Straße 4 in Berlin-Wilmersdorf she lived an invisible life for years, detached from the outside world. The flat, which she and her husband had moved into in 1918, became both a refuge and a prison. Her survival, however, had been dearly bought at the price of surrendering an extensive art collection, assembled by the couple before 1933 and – according to her niece Charlotte Zander – signed over to Hermann Göring under duress. The collection was taken to Silesia [now Poland] in 1943 to safeguard it from the air raids on Berlin, and has been missing since.
An ammunition box, said to have been found on a waste paper dump, and given to the Akademie in 2012, represents, as it were, the message in a bottle supplying much of what is currently known – as fragmentary as it – about Ella Jonas-Stockhausen. Did the pianist pack the case herself? Or had others wished to inform future generations?

Ella Jonas-Stockhausen (1883, Dortmund; 1967, West Berlin) was a pianist and music instructor. She performed extensively as a solo pianist from 1905 to 1935, and also taught the instrument, for instance, at the Klindworth-Scharwenka Conservatory in Berlin. Banned from performing in 1935, she survived as a Jew in Berlin, secluded in her flat. She began to give concerts again around 1947, including at the RIAS and Nordwestdeutscher Rundfunk.