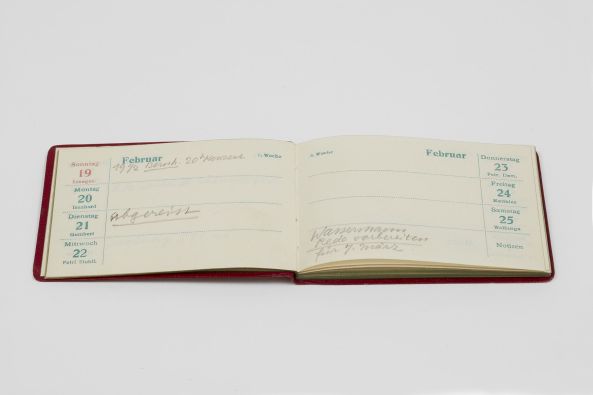 When does a farewell become reality? The writer Heinrich Mann had to leave Berlin hastily for France on 21 February 1933, without time to place his library and his manuscripts in safekeeping. As a signatory to the Internationaler Sozialistischer Kampfbund’s “Urgent Call” to form a united front against fascism appealing to communists and social democrats to join forces against Hitler, he had been under close scrutiny from the National Socialists. Although the Akademie members had elected him to be first president of the Literature Section just two years earlier, the National Socialists had forced his resignation from the Prussian Akademie der Künste. While in French exile, he would ultimately be stripped of his German citizenship, leaving him effectively stateless. How can a writer capture an event which so abruptly changed his life? Did he consider the consequences of flight and exile when he – probably during the journey – noted just a single word in his pocket calendar? The entry was unsettlingly brief: “departed”.

Southern France was only a secure place for German émigrés for a few years. In September 1940, as the situation there, too, became dangerous following the German army’s occupation of France, Heinrich Mann and his wife Nelly undertook the difficult journey over the Pyrenees. They eventually reached Lisbon and were able to take one of the last available passages on a ship to the United States. The finality of leaving old Europe became apparent at that moment. “Germany had been unnecessary for so long: the now abducted Europe was not. The view of Lisbon presented me with the harbour. It would be the last that I saw of Europe as it faded from sight. It seemed so inexplicably beautiful. A lost love is not more beautiful. Everything given to me I had experienced in Europe, the pleasure and pain of one of its eras that was mine; but I am also obliged to those many which came before my own existence. This farewell was extremely painful.” (Heinrich Mann, Ein Zeitalter wird besichtigt, 1946)

Heinrich Mann (1871, Lübeck; 1950, Santa Monica/USA) was a writer. He was a member of the Prussian Akademie der Künste from 1926 to1933, when he was forced to resign. He fled to France, was stripped of his German citizenship, obtained Czechoslovak citizenship in 1936, and was in exile in Nice until 1940. Then he escaped to Portugal and travelled by ship from Lisbon to New York. He lived in Los Angeles and later Santa Monica. In 1949 he was appointed the designated president of the Deutsche Akademie der Künste, East Berlin.