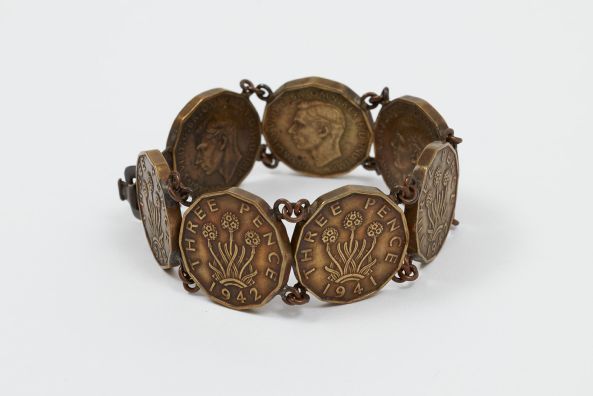 Bracelet of threepenny bits, estate of John and Gertrud Heartfield, England, after 1941–42

What makes this bracelet so special is not its value or artistic workmanship – but that it is a memento of love in a time of extreme privation. It also clearly signals the Heartfields’ commitment to England, which offered Gertrud and John Heartfield protection and relative safety after a period of political persecution and a dangerous escape.

John Heartfield, who used his art consistently to fight National Socialism – especially the characteristic style of photomontage he developed – had to flee Germany early in 1933. After five years in exile in Prague he travelled to England in 1938. The following year, he met his later wife Gertrud (“Tutti”) Fietz at an event held by the Freier Deutscher Kulturbund (Free German League of Culture in Great Britain), an organisation of exiled creative artists in North London. After a few months, Tutti, who was working as a housekeeper, moved into Heartfield’s small “granny flat”, where they would live for the next ten years, until they returned to their native country. However, the war was very much present in London as well. Approximately 43,000 civilians were killed between 7 September 1940 and 21 May 1941 in German air raids. Heartfield was classified as an “enemy alien” and interned three times in English camps. Plagued by ill health, he was unable to build on his earlier artistic success. Finally, in 1943, he managed to secure permanent employment with Lindsay Drummond publishers.

When and on what occasion John Heartfield gave his companion this bracelet and matching brooch is unknown. Besides the fact that their extremely limited financial means prevented them from giving extravagant gifts, this piece epitomises the fashion of that day. In times of war, jewellery made of base metals was especially popular. Even during the Wars of Liberation and the First World War, “gold” was given “for iron”; donors wore jewellery pieces as a patriotic gesture and visible proof that they had personally contributed to funding the war. This bracelet is quite in keeping with this tradition. In England and the United States, these kinds of love tokens, given by soldiers to their girlfriends, were known as “sweetheart jewellery”.

John Heartfield, born Helmut Herzfeld (1891, Schmargendorf near Berlin; 1968, East Berlin), was a visual artist. In 1933 he escaped from Berlin, remaining in Prague until December 1938, and subsequently worked for the newspaper "Arbeiter-Illustrierte-Zeitung". During his exile in London, from 1938 to 1950, he was interned as an “enemy alien”, worked for the Free German League of Culture in Great Britain, and from 1941 as a book designer for various publishing houses. In 1943 he found permanent employment with Lindsay Drummond publishers. In 1950, he returned to Germany, first living in Leipzig and then in East Berlin. He became a member of Akademie der Künste, East Berlin in 1956.