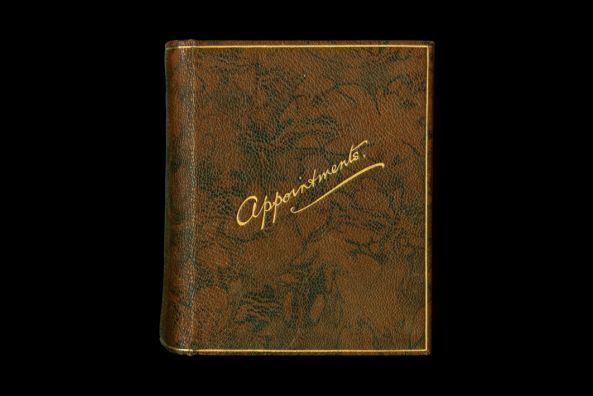 'Appointments Book', detail of the diary from the Arnold Zweig Archive 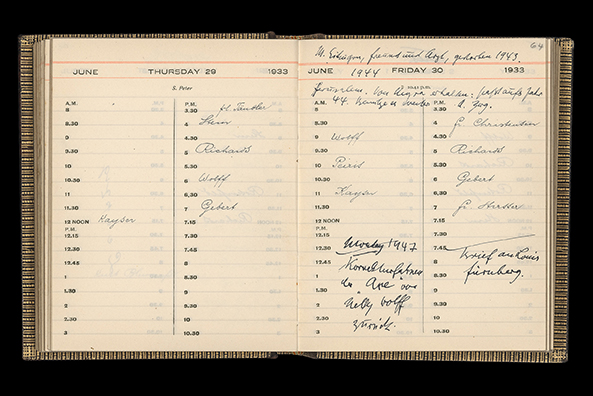 'Appointments Book', detail of the diary from the Arnold Zweig Archive

Two years, two countries, two lives – this is how the content of the compact booklet presented here can be outlined.1 The high-quality presentation, with its leather cover and the word “Appointments” embossed in gold, stands out from within writer Arnold Zweig’s estate of nearly ninety appointment calendars. The use of such an intimate document by two people is rather unusual, but this is exactly what the two adjacent handwritings reveal. First, you notice the name of the original owner, noted in his distinctive, fine handwriting: “M. Eitingon B[erlin] 1933”. As you leaf through the calendar, it becomes clear that it is the patient calendar of the founder of the Berlin Psychoanalytic Institute, Max Eitingon. The doctor used it to record the names of the people who came to him to be analysed, an average of four to six per day, including: Gebert, Holländer, Horowitz, Kayser, Richards, Rosenfeld, Stern, Wolff. Eitingon began his analysis sessions on Friday 6 January 1933, but had to end them eight months later, on Wednesday 6 September. That was the day on which, apparently, he went to his institute, his life’s work, for the last time. On 31 December 1933, he left Germany forever and immigrated to Palestine. Ten days previously, Arnold Zweig had found a safe haven there from the Nazi regime, having travelled via Prague, Vienna, Sanary-sur-Mer, and other stops along the way.

The fact that Max Eitingon took his 1933 patient calendar with him when he fled into exile – and kept it safe until he died, even though it would have been a painful reminder of what he had to leave behind in Germany – shows how important this document was to him. His friend, Arnold Zweig, became its second owner when it was given to him as a personal gift a year after Eitingon’s death by his widow, Mirra. The calendar also matched 1944, in that the days of the week coincided with the calendar days, which Zweig himself mentioned in it, although he only actually used it three years later according to his note “1947, Haifa”. You can sense a certain timidity on the part of Zweig as he writes: The personal records of letters sent or submitted, appointments, and occasionally of works therein, are sparse. On the other hand, his “Pocket Diary 1947”,2 which he kept in parallel, is densely packed with detailed notes and drafts.

A number of indications suggest that the friendship between Max Eitingon and Arnold Zweig had already begun in Berlin in the 1920s. Alongside several personal appointments, for example regarding travel, Eitingon’s calendar records a meeting with Zweig on 17 January 1933. In exile, Eitingon became a close confidante of Zweig’s, as evidenced by the surviving correspondence from 1935. The hugely influential 20th-century thinker and founder of psychoanalysis, Sigmund Freud, provides a fixed reference point for their relationship. Both men were in constant contact with Freud by letter and telephone, however Eitingon was able to visit Freud more often, thus representing for Zweig an additional connection to the great scholar. When Austria was occupied by the Nazis, concerns for Freud’s safety grew, and even his friends in Palestine feared for his life. Freud was able to forward them his new address in London on 21 May 1938, though with the addendum: “uncertain when, hopefully before the end of May”.3 On the evening of 3 June, Eitingon phoned Zweig and informed him of Freud’s imminent departure with relief. Even though Freud could be sure that the message would reach Zweig immediately, he wrote a postcard to his poet friend on the day of his departure, in which the tension in this moment of salvation is still tangible in the sober formulation: “Leaving today for Elsworthy Road, London N. W. 3. Affect. greetings Freud.”4

Both the founder of psychoanalysis and his first and most loyal follower, Max Eitingon, died in exile.5 In 1948, Arnold Zweig returned to what was by then a fundamentally changed Germany. He brought with him documents belonging to his deceased friends, including Eitingon’s therapy calendar and letters, as well as sixty-two original letters from Sigmund Freud. Zweig created a literary monument to his comrades in Berlin, and at the same time processed his personal loss by completing his manu¬scripts for Freundschaft mit Freud (“Friendship with Freud”) and Traum ist teuer (A Costly Dream), which he had begun in exile. In the latter, it is easy for an informed reader to see Max Eitingon behind the character of Manfred Jacobs. The first-person narrator, also a psychoanalyst, describes a visit to the apartment of the late Dr Jacobs and wistfully recalls “a reunion with the specialised section of his library! Every edition of our journals was there, properly bound, every book from the three or four publishers, in which our International Psychoanalytic Society has set out the results of their research”.6 It is also quite possible that Zweig was thinking of the selfless support he received from Eitingon during the difficult years writing in exile. His friend had helped him to earn a living by arranging lectures on his behalf. In addition to this, the Eitingons either had the Zweigs stay with them when they were in Jerusalem or they would arrange free accommodation for them. There is also evidence that Eitingon advocated to Georg Landauer, the head of the German Department of the Jewish Agency, for a monthly grant, which Zweig received from 1940 until his time in exile ended.

Max Eitingon, Sigmund Freud, and Arnold Zweig were bound by an extraordinary friendship; their paths crossed time and time again. Not only can this be traced in the calendar presented here, but also in other papers left behind by Arnold Zweig.