A Small, Discreet Celebration – the reopening of the Villa Serpentara in Olevano 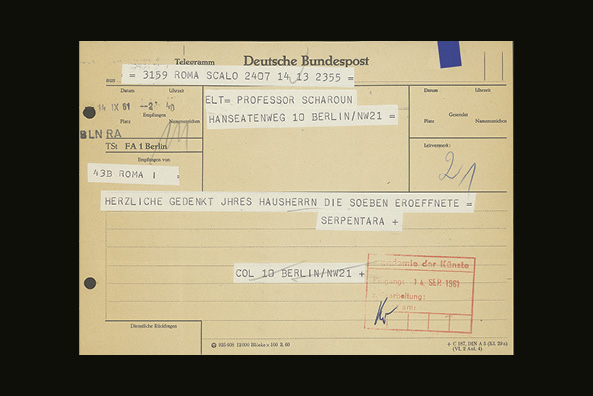 “Owing to the strained financial circumstances of the Akademie der Künste, I must ask you to desist from this inauguration cere-mony”, writes Gerhard Boeddinghaus, Senate for Public Education, in a letter to the Akademie der Künste on 4 September 1961. What he was referring to was the planned reopening of the Villa Serpentara in Olevano near Rome, which, after a long break, was again to become available to the Academy as an artists’ residence.

At the beginning of the 19th century, the swathe of land between Subiaco and Palestrina in the Sabine Mountains had been discovered by artists from various European countries as the embodiment of an ideal landscape. The Romantics – from Joseph Anton Koch and Franz Theobald Horny to Julius Schnorr von Carolsfeld and Carl Blechen – had set up their easels there. It was thanks to the initiative of German artists associated with the Karlsruhe landscape painter Edmund Kanoldt that the stand of holm oaks in Olevano, “the Serpentara”, was preserved in 1873. In an impromptu rescue and fundraising campaign, they prevented the threatened deforestation by purchasing the hilly terrain occupied by a grove of ninety-eight oaks for 2,350 lire. In order to safeguard the site in the long term, they donated it to the German Emperor, who entrusted it to the Royal Academy of Arts in Berlin. From the 1890s, the sculptor Heinrich Gerhardt, who lived in Rome, was responsible for supervision on site. It was he who, after the German Imperial Embassy in Rome had refused development of the site, purchased a plot of land directly next to the grove and built a “refuge” complete with artists’ studios on it. Gerhardt eventually bequeathed the property and the villa to the Academy, which inherited it upon his death in 1915. Since then, it has been sending artists to Olevano on work-study residences, with interruptions during the First and Second World Wars. And from then on, the Akademie der Künste was entrusted with a property that required incessant correspondence between Rome and Berlin and never-ending interventions. It had to be patched up and refurbished, requests for money and foreign transfers went back and forth, fire and liability insurance policies became due, the water tank had to be repaired and maintained, stoves purchased, contracts signed with the administrator, the proceeds from the olive and grape harvests agreed with the custodian family, firewood procured, pests controlled, the right of way through the grove organised, and stone walls renewed. House rules were drawn up, and over the years countless inventory lists were made, itemising everything down to the last fork.

In 1945, the Villa Serpentara was seized by the Allies. In the 1950s, lengthy restitution negotiations were held, well-documented in the files of the Historical Archives, owing to disputes over the legal succession of the Prussian Academy of Arts to the Villa Serpentara and the Villa Massimo in Rome. In 1956, under the bilateral cultural agreement signed by the Federal Republic of Germany and Italy, the villa was finally returned. In the ensuing years, the dilapidated building was inspected and make-shift repairs carried out. In the autumn of 1961, the Academy and the Senate for Public Education in Berlin decided to open the villa to artists again. The building’s dubious structural stability posed an obstacle to this, as did the still outstanding and essential maintenance work and the lack of furnishings. In the early summer of 1961, Maria von Buttlar, the wife of the Secretary General of the Akademie der Künste, Herbert von Buttlar, assumed responsibility for the villa. She travelled to Rome, where within a few weeks she succeeded in ensuring its “provisional habitability”. She not only procured furniture and tableware and negotiated with local companies and authorities, but also finally moved into the villa with her three sons for a trial stay. At the end of August 1961, in consultation with the Academy and Manfred Klaiber, the German Ambassador to Rome, a date was set for the official opening “when the holidays in Italy are over”. But then, shortly before the planned date, the Berlin Senate called everything into question again: financial bottlenecks and the political situation shortly after the build-ing of the Wall did not seem to be appropriate circumstances for a celebration. But perhaps the invitations had already been sent out, and the Foreign Office’s wish to “inaugurate Villa Serpentara with a small, discreet celebration” weighed too heavily. The fact is that the villa, “this small house of communication with the outside world”, as the Secretary General, who had travelled to Rome, dubbed it in his speech, was opened at 11:30 a.m. on 13 September 1961, in the presence of the German Ambassador and representatives of the cultural institutions in Rome. The Buttlars’ then 13-year-old son Adrian provided the photographic record of the event. Thanks to Maria von Buttlar’s receipts for expenses, we also know what was purchased for the occasion: “Bread and ham, sausage and cheese, cigarettes, cigars, matches, toothpicks, brochettes, mineral water, orange juice, grapefruit juice, tomato juice, 25 bottles of wine.” The following day, President of the Akademie der Künste, Hans Scharoun, received a telegram from Rome.

Author: Anneka Metzger, Assistant to the Director of the Archives at the Akademie der Künste.

Since 1961, the Akademie der Künste has been awarding fellowships for artists in Olevano as part of the Villa Serpentara Fellowship of the JUNGE AKADEMIE.
A conference in Rome from 25 to 27 Mai 2022 "Olevano - Misurare un mito / Measuring a Myth", in cooperation with the Villa Massimo, Rom, the Bibliotheca Hertziana, Rom, and the Akademie der Künste, Berlin, was dedicated to the history of the artist town of Olevano and the "Serpentara".