Ellen Auerbach, crossing aboard the Patria from Trieste to Jaffa 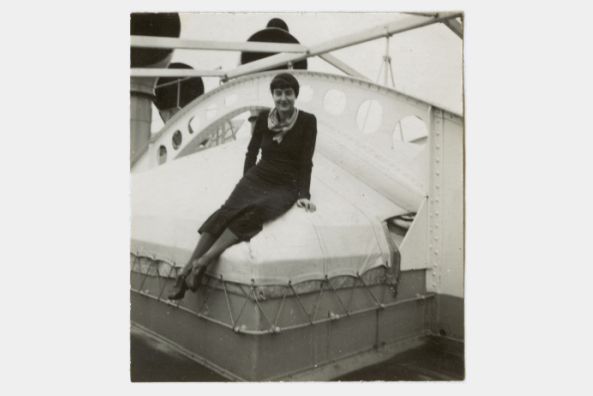 People on the pier, waving goodbye, happy expressions, a promise of new beginnings. Sun, waves, seagulls. On deck, Jews praying, cheerful young people, singing and joining in round dances. Two men meet and, reclining in deck chairs, strike up a conversation. People lean against the ship railings, balance from the masts and rigging, gaze straight ahead.

Photographer Ellen Auerbach’s scenes filmed aboard the Patria are among the few testimonies from the 1930s that document these kinds of passages by sea from Europe to Palestine. Due to increased persecution after the Nazi assumption of power, Jewish emigration to Palestine – initially promoted by the Zionist Movement – increased considerably. Auerbach’s film depicts famous figures such as the renowned Berlin architect Erich Mendelsohn and Chaim Weizmann, one of the foremost founders of modern Zionism and first president of the newly proclaimed State of Israel, established in 1948. In a short film sequence, Weizmann is seen reclining in a deck chair, reading. Mendelsohn addresses him, and then sits down next to him. Each of them would have a considerable influence on modern day Israel.

As the stamps in her passport show, Ellen Auerbach embarked on a passage in an emigrant ship from Genoa to Palestine the year before, departing on 16 December 1933 and arriving in Haifa on 21 December. Her most poignant recollection of her arrival was the devastating loss of her photographic equipment, which was stolen from the customs building. In early 1934 she convinced her future husband, Walter Auerbach, to travel to Europe, taking in Italy, Austria, England – and even Berlin. They returned to Palestine in autumn. We can trace the course of their journey from the many stamps in her passport. On 31 October 1934, Ellen Auerbach boarded the Patria in Trieste for her return to Jaffa.

Ellen Auerbach, née Rosenberg, (1906, Karlsruhe; 2004, New York) was a photographer. In 1929 she moved to Berlin and together with Grete Stern opened the ringl+pit studio for advertising and portrait photography. In 1933 she emigrated to Palestine and opened a photography studio with Liselotte Grschebina in Tel Aviv. From 1936–37 she lived in London, then emigrated to America in 1937. From 1944, she lived in New York, travelling extensively through Latin America and Europe. She worked as a child therapist from 1965 to 1984.

A film sequence by photographer Ellen Auerbach with scenes filmed aboard the Patria has been displayed in the exhibition "Uncertain States. Artistic Strategies in States of Emergency",
15 Oct 2016 — 15 Jan 2017