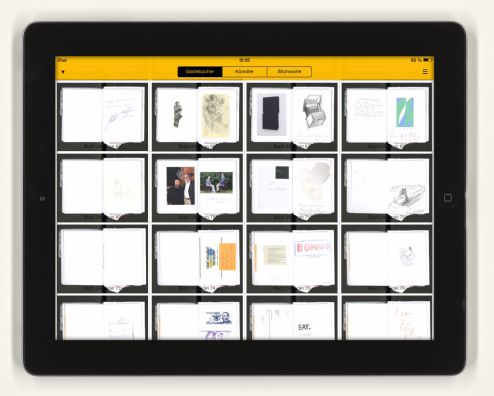 As varied as the art scene itself, the entries range from simple written dedications and sketches to photo and material collages, and even folding, three-dimensional images. These dedications also testify to Wulf Herzogenrath’s many encounters with these artists both privately and through his work between 1967 and 2013. Many of the 1342 artists immortalised in the books, including Marina Abramović, Bill Viola or Nam June Paik, are also represented in the video art collection Wulf Herzogenrath gifted to the Archives in 2011.

In June 2014, the Archives launched a pilot project to digitise the visitors’ books (a total of 2565 double pages) and develop an app to present them. Using an iPad, the scanned dedications could be characterised by a number of text fields and linked to standard search terms from the Integrated Authority File (GND). To facilitate the export of data, the input screen structure was designed to be compatible with the Archives database fields. At present, Wolf Herzogenrath is supplementing the entries, describing individual artists with his own comments and memories of them. Since the text boxes have a voice input function, the comments can also be stored as an audio file and played in original sound in the presentation mode. This prototype offers a multimedia app not only suitable for media stations, but which, after obtaining a licence, can be accessed online in the form of a virtual exhibition.

Given the system’s mobility and the app’s simple handling, it also promises other options for use in the Archives including, for example, as an on-site method of documenting collections of papers and giving them short index entries when taking over archives.