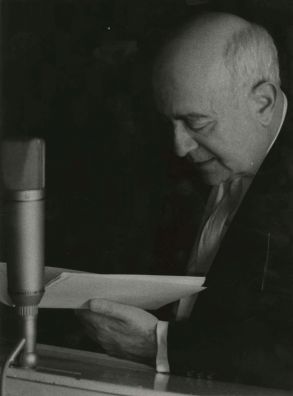 On behalf of the Theodor W. Adorno Archive and the Hamburger Stiftung zur Förderung von Wissenschaft und Kultur, the Walter Benjamin Archive is presently preparing an edition of Theodor W. Adorno’s lectures from 1949 to 1968. Vorträge 1949–1968 is due to appear in the Suhrkamp Press in 2018. This edition comprises 21 improvised public (or at least semi-public) lectures Adorno gave between 1949 and 1968, in the years after he returned to Germany. The lectures, which all share an interdisciplinary approach, can be primarily located in musicology and sociology, though they also address literary issues.

The lectures have survived in a written form or as audio recordings. The texts are based on sound recordings or – where no audio recording has survived – on contemporary transcriptions, usually from Adorno’s personal papers. Since the transcriptions (especially if Adorno did not read through them) often have telling flaws and textual corruptions, it was necessary to review them critically and thoroughly in preparing the texts.

When improvising, Adorno tended to rely on key words he had written down beforehand. Occasionally, these are elaborated in some detail, but are usually dry, concise notes jotted down shortly before the lecture. In this edition, the notes are included in an appendix. By comparing these notes to Adorno’s extemporised speeches, it is easy to follow the spontaneous development of his thoughts – the open and rich expression of his ideas, formulated without a foreseeable conclusion in mind, and the flow of his thoughts, seemingly put freely and effortlessly into words.

There are three good reasons to provide readers not only with the lectures themselves, but also the notes Adorno took as cues for his improvised talks. 1. It brings out each lecture’s organisation and process of reasoning; 2. It casts a light on the background (which sometimes also fell victim to self-censorship); 3. It can also offer material Adorno was unable to elaborate within the available time. – However, since this edition set out to avoid redundancies, the appendix does not include Adorno’s notes and prepared sections where these anticipate his formulations in the lecture word-for-word and have no added value.

Vorträge 1949–1968 does, though, include over 700 editorial notes indicating the open and unreferenced quotes in Adorno’s lectures, pointing to allusions, explaining references to people and works, and casting light on backgrounds and contexts. Yet these notes are not intended as interpretative or, in a narrower sense, explanatory. In addition, this volume has a detailed contents, an afterword from the editors, and an index of persons.

In one of these lectures, Adorno quotes the words of Immanuel Kant, “Philosophy cannot be learnt … we can at most learn to philosophise”, an approach he emphatically made his own. In his lectures, Adorno’s improvised excursions provided a vehicle for him to spontaneously evolve his ideas, and were not seeking to teach some finalised material. Adorno’s invitation and call to participate in the process of developing ideas is also equally directed to today’s audience.

In cooperation with the Suhrkamp Verlag