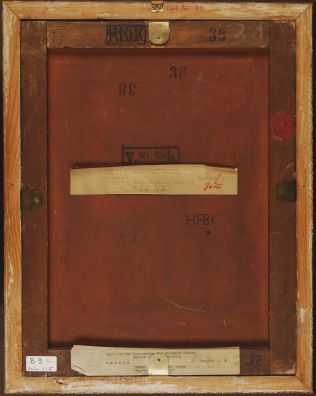 Provenance research is one of the fundamental tasks of museums, libraries and archives, and has become increasingly important over the years. Since the Washington Principles in 1998 and Germany subsequently issuing in December 1999 a “Joint Declaration by the Federal Government, the Laender (Federal States) and the national associations of local authorities on tracing and returning Nazi-looted art, especially Jewish property”, research has again come to focus on issues concerning the provenance of art works. In October 2017, this responsibility led the Akademie der Künste to organise a research project to systematically investigate the provenance of those pre-1945 works in the painting and sculpture collection which came into the Akademie’s possession after 1933. This provenance research is being generously supported by the German Lost Art Foundation for two years until the end of September 2019.

The research results will be published via the Archives Database. In addition, all works restituted are to be published on the Akademie der Künste website. Where research indicates doubt over provenance and a possible loss between 1933 and 1945 through Nazi persecution but without this being successfully concretised further, the works in question will be listed on the German Lost Art Foundation’s Lost Art Internet Database.