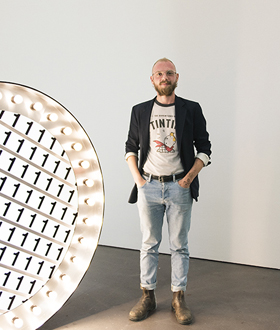 Dorian Sari is an artist and researcher. He is an observer of politics, emotions and social movements. His work mainly focuses on looking at human beings and cultures in his installations, and projecting these, together with personal and collective mythology, into completely fictional, theatrical and cinematographical scenes based on Jungian psychoanalytic interpretation of humans and their symbols. He creates a universe using numerous narrations, usually in the form of a sculpture or sometimes as a video projection. Sublimating actuality with materials found in the street. Discharging his observations into these materials involves ceremonial rituals in the production process. Sometimes it is just a quiet sewing, sometimes it takes the form of a silent confession in his video works. Sculptures tell a story using the language of poetic symbols. The parallel to this communication between the conscious and the collective subconscious. He combines rational scientific research with metaphysical methods. Pointing at current affairs and taking a measure using his multidisciplinary background and artistic vision are the main points of his work.

“During my residency, I will continue my research based on how people use adjectives in their language and how they react to certain meanings as expressed by others. This time focusing on Germany's collective psychological state of mind: specifically on the topic of political correctness. My ongoing project The Dark Ocean explores the cultural conflicts and relationships between “first world” and “third world” perspectives on contemporary art and culture.“