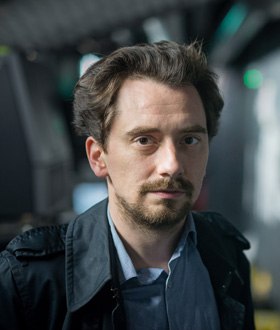 Johann Lurf studied fine arts at the Academy of Fine Arts in Vienna. He is known as an experimental filmmaker who cannot easily be subsumed under one style or category. His works examine various modes of vision and motion, but his more formally-oriented films are always accompanied by strong narratives that, however subtly, examine society, codes, norms, perception, and the history and development of cinema itself. Dabbling in short and feature-length films, analogue and digital, found-footage and his own shots, Johann Lurf has created a wide variety of cinematic works, many of which have been featured at film festivals and cultural institutions, notably the Sundance Film Festival, the Anthology Film Archives, Austrian Cultural Forum New York and the Los Angeles County Museum of Art.

“The research during my stay in Berlin will be linked to my found-footage film ★ (2017), in which the starry night skies of film history are compiled and compared with each other. The result is to be a book that visually engages with the peculiarities of the collected material, expands on this and examines the context of the images. A booklet is also to be published, which will demonstrate the theoretical and analytical text and graphics-based correlations and contradictions in the collected material.”