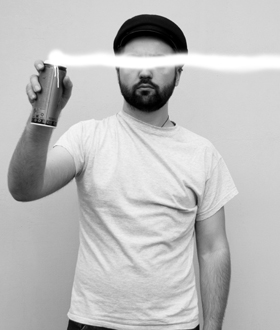 Sasha Kurmaz graduated from the Design Department at the National Academy of Culture and Arts Management in Kyiv.

In his artistic practice, he uses photography, video, and public interventions, through which he studies social interrelationships that address themes both poetic and political. In most of his works, he plays a game of de-powering power structures, explores the changing relationship between human beings and the modern world and examines the tension between the citizen and the state.

I have a few ideas for projects I would like to work on simultaneously during my residency. One of them is a project in which I would like to study the relationship between society and the media. In particular, I'm interested in the influence and role of modern media platforms during an emergency, and how a changing media landscape affects the relationship between individuals and society as a whole.