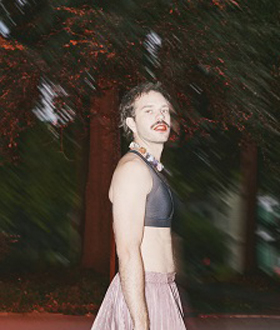 lives on the edge (here)

KIM DE L’HORIZON was born in 2666 on the planet Gethen. During the 2021‒22 season, Kim was an in-house author at the Bühnen Bern, where Hänsel & Greta & the Big Bad Witch – eine Weltrettung in 13 Übungen will premiere in September 2022. Before the novel Blutbuch débuted, Kim attempted to garner attention through young talent awards – including the competitions Textstreich-Wettbewerb für ungeschriebene Lyrik, the Treibhaus-Wettkampf für exotische Gewächse and the D[r]amenprozessor. But by now, Kim has had enough of “ICH”, studies witchcraft with Starhawk, transdisciplinarity at the ZHdK (Zurich) and collectively contributes to texts in the magazin DELIRIUM. Kim was awarded the literary prize of the Jürgen Ponto-Stiftung for Blutbuch.

Journal of AnWesenheit (Being Present/True to One’s Nature)

For an entire year I’ve been accompanying my body through its transformation in rituals that allow it to come into its own presence. “My” body? But for whom, please, is this macho move here intended? & doesn’t it dissipate too much of the stuff that was previously “me” when I separate myself from the person I love most? & won’t my microbiome suffer more than “I” when it makes such nasty diarrhoea? The transdisciplinary journal scribbles alongside daily life: in sketches and memos outlining affects; in notations; songs; on a search not for one’s own voice, but rather for the voices of all anWesenden ‒ all those present who are true to their natures.

A coming-of-age journal describing a “becoming me”? – embarrassing at best in the 21st century. Instead, it must subjectively be a deVelopment; it must untie itself from the spells of gender & individuality; bind itself to sounds & drawings so that it can get beneath the generic definitions of human & literature.