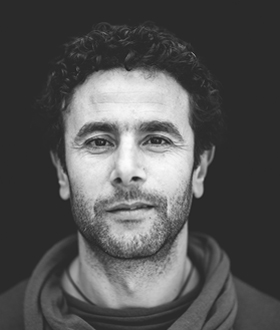 lives in Frankfurt am Main.

Ferhat Bouda was born in Algeria (Kabylia) in 1976 and has been living in Frankfurt am Main as a freelance photographer since 2005. The Kabyle are members of different Berber tribes with a common language. His upbringing in the mountain region brought him into contact with the Berber cultural movement at an early age. As an adolescent, he campaigned for the recognition of his mother tongue (Kabylian). As an adult, he finally left his country with the aim of studying film in France “so that my grandmother can one day see films in her own language”. However, after acquiring a photo camera by chance, he developed an enthusiasm for documentary photography and started studying photography in Paris.

Back in his native country, he devoted himself to a long-planned photographic project on the life of the Berber and nomadic peoples and travelled to all countries in North Africa and the Sahel. What moved him are the people and the diversity of cultures in which these peoples live. Bouda’s work has been exhibited at the Visa pour L’Image photo festival in Perpignan (France) and at the SCAM gallery in Paris, among others. He is a scholarship holder of the French Boulat Prize and the Hessian Cultural Foundation. As a member of the VU’ agency in Paris, his works are published in numerous magazines and newspapers.