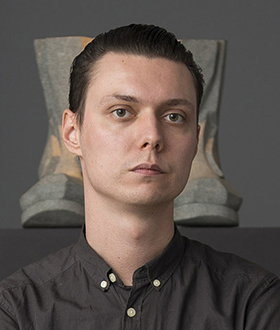 Mykola Ridnyi graduated from Kharkiv State Academy of Design and Fine Arts in 2008. He was a founding member of the Kharkiv-based SOSka group artistic collective and co-founded the artist-run gallery and laboratory of the same name. Ridnyi combines different artistic activities: he is an artist and filmmaker, curator and author of essays on art and politics. His artistic practice focuses on media ranging from early collective actions in public spaces to the amalgam of site-specific installations, sculpture and moving image. In recent films he experimented with nonlinear documentary and fiction montage and collage. The way in which he reflects social and political reality draws on the contrast between the fragility and resilience of individual stories and collective histories.

“A number of my recent works reflect on the problem of the growth of the political right all over Europe. The starting point for the new and ongoing research was a book of essays written by Ukrainian football 'ultras' inspired by Italian futurism. During the residency, I'm planning to delve deeper into the topic of unobvious connections between Italian futurism and today's right-wing subcultures.”