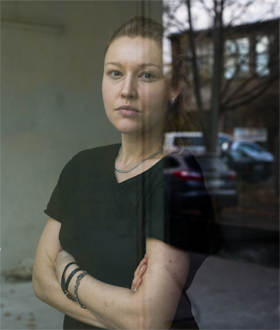 Christin Berg works in Paris and Berlin. Her films are intended for the cinema screen and made in the spirit of arthouse feature films. She usually works with an ensemble. The texts for her films are poetic and pursue an atmosphere of a heightened state of the senses.
She completed her studies in scenography at the Fachhochschule Hannover and Slade, UCL London, and ended her education as a Meisterschülerin at the Städelschule Frankfurt. Her work has been exhibited at national and international institutions including the Cité internationale des artes Paris, Musèe du Louvre, and Kunsthalle Hamburg.

Far from cities, and far from light smog, one can see into the infinity of stars in the sky. I look from land into the universe, for example, at the Hubble Space Telescope in orbit for 30 years, which after launch had been diagnosed with a spherical aberration. Corrective optics helped improve visibility. This should be an aspect of our way of seeing today.
The Biblioteca Pier Paolo Pasolini will allow me to study the work of the poet and devote interest to defects that are considered technical errors but have ultimately promoted cultural development.