Restoration of dust jackets at the Anna Seghers Museum 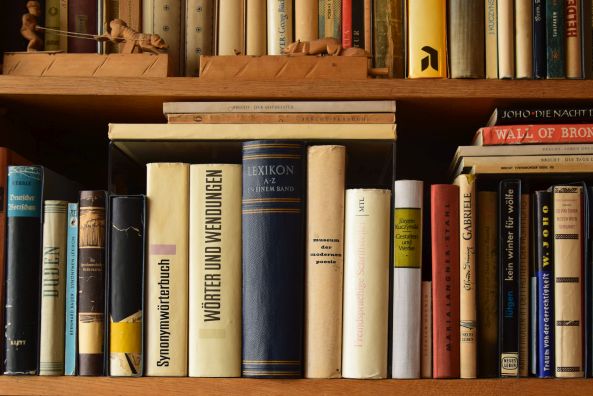 Surrounding herself with books was key for Anna Seghers. Bookshelves filled every corner of her living and work rooms in Adlershof, and even today the valuable bequest library containing approximately 10,000 volumes impresses visitors to the Anna Seghers Museum.

In addition to rare first editions and translations of her work, there is a working library among the books displayed in the rooms and hallway - an important foundation and source of inspiration for Anna Seghers and her writing. It includes, among other things, early editions of fairy tales and sagas, art volumes from when she studied in Heidelberg, an extensive collection from her years of exile in France and later collections on a wide variety of topics. The numerous books with dedications by writer friends from many countries are particularly valuable.

As a result of decades of use, rearrangements and material aging processes, many of the dust jackets became damaged. Part of the inventory was restored in the course of the project, whereby the improvement to the overall impression given by the museum was prioritised. Therefore, a selection of books was taken from the book series displayed at the front in duplicate and sometimes in triplicate. The aim was to preserve the original charm of the idiosyncratically arranged library, which emanates from books of different ages and degrees of preservation bearing visible signs of use.

After the restoration, the book collection looks well cared for on the expansive shelves, both from a distance (living room) and on closer inspection of individual volumes (study). During the restoration, special attention was paid to the first editions displayed in showcases. On the basis of these, both her development as a writer and the sometimes unusual publication history of her works can be traced, for example what was probably her most famous novel, The Seventh Cross, which became an international bestseller. The previously clearly visible creases, tears and missing parts of the dust jackets were restored, for example the first complete edition in English (published in 1942 in New York by Little, Brown & Co.) and the first German-language book publication (also published in 1942 by the exile publisher El Libro Libre, Mexico), as was the damage to the small-format "marching kit edition" for U.S. soldiers and the first edition published by Aufbau-Verlag, which became available in 1946. The measures carried out have enhanced both the individual volumes and the exhibition as a whole.