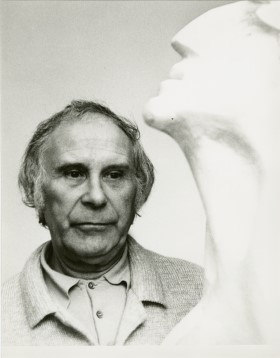 Like many artists of his generation, the sculptor Theo Balden was influenced by classical modernism. His formal sculptural language is inspired by Käthe Kollwitz, Ernst Barlach, Wilhelm Lehmbruck and in the post-war period especially by Henry Moore. Balden studied at the Bauhaus in Weimar, became a freelance artist in 1924 and was involved in communist resistance groups. After being interned in Canada, Balden was able to return to East Berlin in 1947. He taught at the Kunsthochschule Berlin-Weißensee until 1958 and was a renowned artist in the GDR from the mid-1960s. The sculptor created numerous sculptures for public spaces, including the works Mother with Child (1965), on the ruins of the Franciscan monastery church, in the Mitte district of Berlin, and Siblings (1962), in Friedrichshagen.

Theo Balden Archive (in German only)

Theo Balden in the members database (in German only)