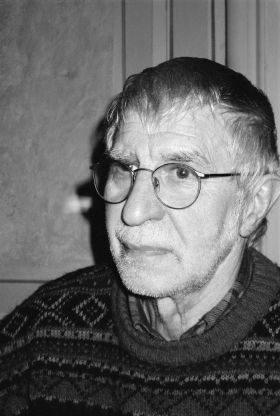 The graphic artist Manfred Butzmann is at once artist, critic, and a voice of warning who was once an activist in the church peace movement. His artistic career began in East Berlin in the 1960s. Since 2007, he has once again been working in his native city of Potsdam. Butzmann is known for his impressive depictions of Berlin's back courtyards, black gabled walls and the city's old border wall. Political barbs were consistently embedded in his poetic-melancholic graphics and political posters, which ultimately led to bans on many of his works in the GDR. He is still politically active today, denouncing, for example, the impending losses threatened by climate change, as in the series Heimatkunde (1992).

Manfred Butzmann's works in the Galerie A (in German only)