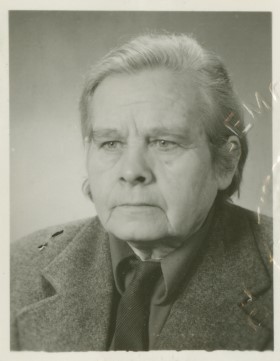 The painter and graphic artist Fritz Duda studied from 1924 to 1933 as a master student under Karl Hofer and Paul Plontke at the Berlin University of the Arts. Duda was part of the political underground, with contacts to the communist parties the KPO and the KPD, as well as the anti-Nazi resistance group the Red Orchestra. In 1936 he was banned from all exhibition activities. Only after the end of World War II was he able to work as a freelance artist again, joining the SED and receiving numerous awards, including the Käthe Kollwitz Prize in 1965. His artistic work comprises still lifes, landscapes and groups of figures, abstracted in an expressionistic way and imbued with contrasting colours.