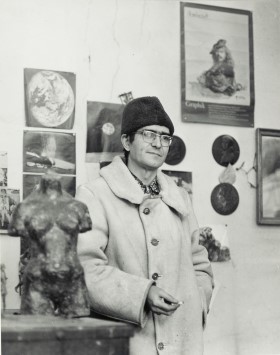 The sculptor and medallist Wilfried Fitzenreiter first found inspiration in classical modernism and from his teacher in Halle Gustav Weidanz. After his studies he became a master student at the Akademie der Künste under Heinrich Drake and worked as a freelance artist in Berlin from 1961. The human figure in combination with narrative elements stands at the centre of his oeuvre, as in The Beaten (1968) in the Schlossberg park in Chemnitz. Fitzenreiter designed numerous coins in the GDR, including commemorative coins (for example, of Johann Wolfgang von Goethe) and special event medals. He also works as a draughtsman and graphic artist.