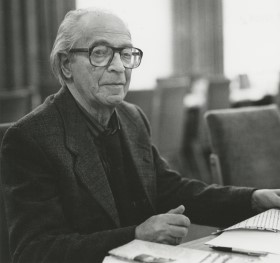 Herbert Sandberg is best known as a caricaturist for Berlin's daily newspapers, for which he worked from 1928 onwards. As a Jew and member of the Communist Party of Germany (KPD), he was first imprisoned in 1934 for “preparation for high treason” and then interned in the Buchenwald concentration camp until the end of the war – a period he explored in his later graphic works. After the end of the war, he was editor of the satirical magazine Ulenspiegel until 1950, working as editor-in-chief for The fine arts and as a columnist for Das Magazin (The Cheeky Drawing Pencil), among others. In 1955 he continued the tradition of theatre drawings, after being commissioned by Bertolt Brecht, which brought Sandberg international attention. Sandberg was one of the few visual artists in the GDR to protest against the expatriation of songwriter Wolf Biermann in 1976.

Herbert Sandberg in the members database (in German only)