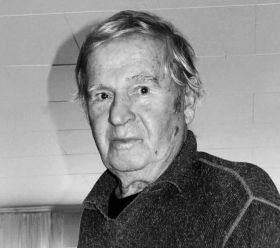 Together with Manfred Böttcher, Harald Metzkes and Werner Stötzer, the painter and graphic artist Horst Zickelbein belonged to the circle of the “Berlin School” (Lothar Lang) in the late 1950s, which sought dialogue with international modernism. Zickelbein, however, broke away from painterly sensualism and from 1958 pursued his own path as a freelance artist in East Berlin. He placed reduced geometric forms and structures with an abstract effect at the centre of his work and turned fundamentally away from the figure. Zickelbein finds inspiration in nature and literature, where numerous ciphers and thoughts are gathered.