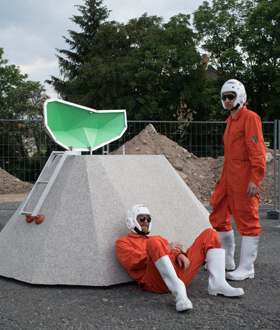 Peter Behrbohm is a Berlin-based artist and architect. Individually as well as in collective constellations, he explores future conflicts and speculative societies, designs operative obstacles and installs counter-institutions. His works are surgical interventions in public spaces, routines and discourses, in which he implants parallel realities that are subsequently colliding with everyday life. Among others, he received the "BDA-SARP-AWARD" by the Association of German Architects, the "Elsa Neumann Stipendium" (2016) or the "MAK Schindler Stipendium Los Angeles" (2019).

Anton Steenbock works deal with capitalism as a sculptural force and the question of how increasingly complex economic structures affect and sustainably shape nature and society. His interventions consist of fake architecture projects, showrooms and widely spread advertisement campaigns. Thereby aiming to trigger political consciousness for urban and environmental changes as well as enterprise acquisitions in public spaces like Google street view and sharing economy apps such as Uber, Coop, and AirBnB.

SONDER is an amoebic company, offering tools to refine conflicts. We intervene in public spaces and discourses with obstacles and counter-narratives, aiming to expose questionable developments hiding in normality. We substitute parts of the scenery to create situations against expectations.

"It is easier to imagine the end of the world than it is to imagine the day capitalism ends", someone once said. We believe this day won‘t be a revolution but the introduction of an irresistible new platform. total.earth is both, a start-up as well as an all-over sharing platform heralding the final stage of sharing economy and platform capitalism. Its aim is to unify all aspects of life in a single app, making the whole world accessible to its customers. Once registered, everything will be free of charge. Instead considered a relic from the past, any possession is strictly prohibited and all available data will be processed and distributed by the company and its omniscient AI.