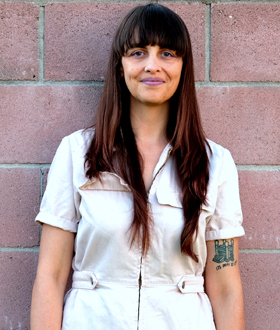 Sarah Ciston holds a Master of Fine Arts in Literature from University of California San Diego. They are a Mellon Fellow in Media Arts + Practice at University of Southern California and an Associated Researcher at Humboldt Institute for Internet and Society, exploring how to bring intersectional ethics and tactics to AI. They also lead Creative Code Collective, a community for co-learning programming using approachable, interdisciplinary strategies. Their AI work includes a machine learning interface to "rewrite" the inner critic and a bot that tries to explain feminism to online misogynists.

For my residency I will extend my work on the Intersectional AI Toolkit, building on established but marginalised tactics to reshape and reimagine more ethical and equitable machine learning. I’ll implement the Intersectional AI frameworks developed during public zine-making workshops and collaborations into printed and interactive publications, plus develop prototypes for anarchist AI–tangible, accessible tools that expose their own making and reveal their flaws. Together these tools and resources ask: Whose voices, visions, and stories are captured by automated systems? Whose are excluded, harmed, or undermined? And how can AI systems be truly for anyone to engage and intervene in?