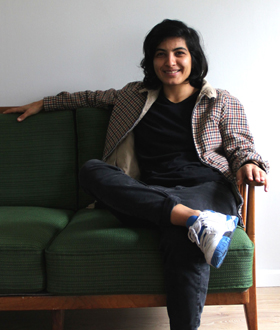 Works and lives in Zurich (CH)

Mirkan Deniz works with sculpture, video and installation. Her conceptual works are often reconstructions and citations. One of her interests is the tension between materials and immaterial effects (trauma, ineffable experiences, and memories). How can an object (a sculpture) maintain this tension while investigating the relationship between past, violence and subjectivity?

Installation of the work Masa, as well as the films Barikat and verbunden

Public art action with the work Masa in front of the Swiss Parliament building in Bern, Switzerland

Participation in the performance Uncounted by Emily Roysdon, Kunsthalle Zürich

Displayed Masa in the context of the exhibition The Others Have Arrived Safely, Shedhalle, Zurich, as well as the public art action at the Palais de Rumine, Lausanne

Auge Kimme Korn series in the exhibition Can hope be disappointed?, Lochergut, Zurich

Masa. Reconstruction of the table on which the Treaty of Lausanne was signed in 1923; public action in Lausanne and Bern

What is time if not activism?, performance, 20 min