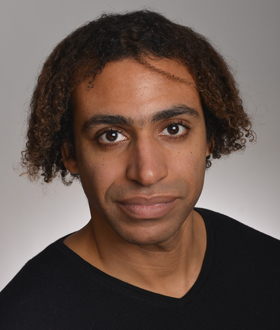 Robert Olawuyi studied art history at Eötvös Loránd University, Budapest as well as video art at the Academy of Media Arts Cologne and under Prof. Marcel Odenbach at Duesseldorf Academy of Art. He devises video installations that are often located at the intersection between figuration and abstraction, where perception becomes visible as a process of reflection. If the video material is created using a recording device, it is irrelevant whether it was recorded by oneself or was found. Its meaning is created in the process of digital editing. Robert Olawuyi sees the video loop as an extended moment of realisation that breaks up the idea of linear time.

“During my stay in Berlin, I would like to realise a work in the form of a video sculpture. The theme of the work is the inverse relationship between completion and dissolution of the individual, two processes that occur in parallel and are nevertheless opposites. This dichotomy articulates a concept of time.”