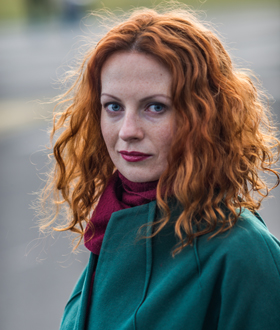 Ada Mukhina is a nomadic artist and theatre-maker with a focus on politically/socially engaged documentary and participatory performance. Her practices include directing, performing, curating, writing, teaching and researching. She graduated with distinction from the Russian State Institute of Performing Arts and earned an MA in Advanced Theatre Practice at the Royal Central School of Speech and Drama in London. Her theatre work has been presented in the UK, Germany, the Netherlands, South Africa, the USA and Russia. As a winner of the Black Box Residency at the Meyerhold Theatre Center, she recently directed and co-authored two theatre productions in Moscow – "Locker Room Talk" and "Caries of Capitalism".

"Not everyone will be taken into the future"* is a phrase that comes to mind during the current lockdown. I would like to reflect on the future of theatre and the art industry, as well as my place in it. How will social distancing change theatre as a community gathering? How will closed borders and the prioritising of national interests influence my identity as a "nomadic artist" and the concept of international coproduction? Which artistic strategies will be left behind and which will become essential and successful? During the residency, I would like to interview artists and curators and to use my own experience as a Russian "artist-for-sale" in the West as documentary material to create a work-in-progress piece about these burning issues.

* "Not Everyone Will Be Taken Into the Future" refers to an installation by Russian artists, the Kabakovs (2001), which consists of a train receding into the distance along the railway tracks, on which pictures rejected by the future are scattered.