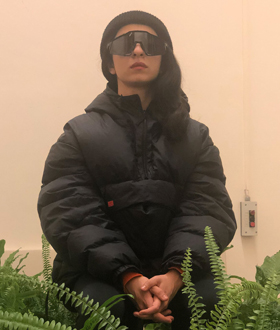 Nazanin Noori's work is comprised of theatre and radio play direction, music, and text. Her focus is on the decomposition and manipulation of language, atmospheric narratives in sound, overcoming cultural narratives of sentiment in the dramatic adaptation of non-dramatic texts, and the action on stage as a ritual act. She studied theatre, film and media sciences at Goethe University in Frankfurt and has worked at Deutsches Theater in Berlin and at Schauspiel Hannover. Her debut album FARCE will be released on Enmossed this year. She selects Acid Folk for POMP, a sound scenario series on Retreat Radio.

I am currently writing a dramatic text in English and German, which is called 'Apology / Apologie': A conversation between a tyrant and his mother in the hereafter / Romeo and Juliet, having an argument in the hereafter / a choir, commenting on what is happening in this world. It is based on Plato's 'Apology of Socrates' and a lyrical secession of the defence speech given by Socrates, who is about to be executed. I intend to implement this text as a radio play / spoken opera and install it in a static stage room. I will also produce the music for it myself.