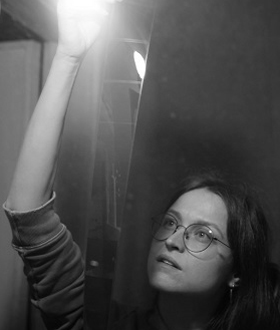 Alina Gorlova is a director and producer. Born and raised in Ukraine, she graduated from Kyiv National I. K. Karpenko-Kary Theatre, Cinema and Television University. Eight years ago, she co-founded a production company, Tabor. Her documentary, NO OBVIOUS SIGNS, which she directed, won the MDR film award for best Eastern European film at DOK Leipzig. Alina was a 2019 Berlinale Talents and Eurodoc 2020 participant. Her latest documentary, THIS RAIN WILL NEVER STOP (2020), won the award for Best First Appearance at IDFA, the Best Feature award at Festival dei Popoli (Florence), as well as other awards at Beldocs International Documentary Film Festival, goEast Film Festival (Wiesbaden), One World (Jeden svět) in Prague, Ice Docs FF (Iceland), Las Palmas FF (Spain).

In my residency, I plan to find a form for the feature film I’m working on. It will be an observational documentary consisting of several parts that will describe the Ukrainian-Russian war from different angles. Discovering violence and military actions anthropologically allows me to observe the actual consequences of the fighting on the environment, people, and all living things. I’ve worked with the war topic in my films several times. I now have a lot of footage from Ukraine that I have filmed since the 24th of February. I hope the residency will allow me the proper amount of time to watch all the footage, discuss the project with professionals, and find the right approach in the editing.