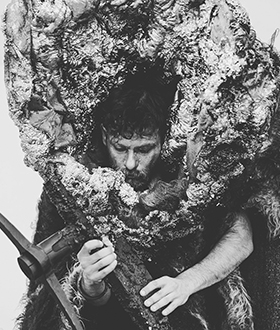 Sahej’s project, Citizen Strange proposes a series of live performances, sculptural installations and AI programs, that collectively imagine a cosmography of radical cohabitations within the toxic contingencies of the present. Rahal’s process interrogates the formulations of contemporary myths and their enmeshment within Indian society, by tracing the figure the non-human, from its mythic relationship to demons of sickness and disease, to its futuristic avatars in algorithmic intelligence. This itinerant cosmography takes its shape between the divisions of myth, self, spectre and machine, suturing them across space-time.