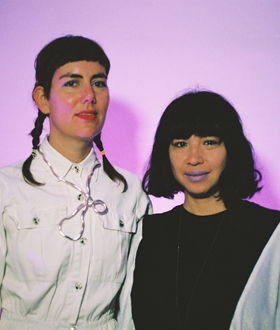 Laura has an MFA in media art and design from the Bauhaus University Weimar and a film editing degree from the International School of Film and TV in San Antonio de los Banos, Cuba (EICTV).Tin studied art and media at the Berlin University of the Arts (Udk) and has a master’s degree in theatre with new media and interactivity from the Universidad Nacional de las Artes (UNA) Buenos Aires. Tin forms part of the queer performance collective CC_Lab and is board member of the association for social-ecological change (VSOW e.V.). They are both members of the Mkv Berlin Media Art Association (medienkunst e.V.).

For the Human-Machine Fellowship, we want to establish an experimental exchange between analog film material, artificial intelligence and organic and recycled materialities that open speculative imaginative spaces beyond the apocalyptic narratives of our time. A found footage collection of two hundred 16mm film reels from the 20th century, whose visions of progress we want to critically evaluate and reinterpret together with AI, provided our starting point. From today’s perspective, we ask what progress means in the face of climate change and a system based on endless growth and exploitation. How can we reframe the vision of a sustainable future by collaborating with neural networks? We will experiment with different organic and recycled materials for the exhibition of the results of this multi-entities collaboration.