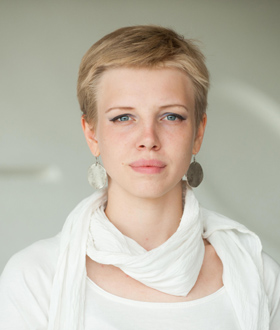 lebt in Wien (AT)

Marina Poleukhina studied composition in at the Moscow Conservatory and at the University of Music and Performing Arts in Graz. Works as a composer, improviser and performer.

“Music is not about sound. The Sound is a sort of language, that reveals the music. In this thing there is no perfect timing for the gesture of the beginning and the end. It will never exist on the concert stage or in your speakers. It's a score as though for the blind people, it's a piece and it's a painting, where the performer is a player, listener, musician, explorer and observer. It's about the unfolding of the situation that creates a field of communication and interplay with a certain object, which can for the most part investigated tangibly. The situation expresses itself, the situation becomes music.”